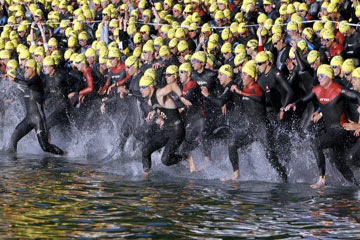 Triathletes head into the water for the start of the Ironman Switzerland triathlon in Zurich in June 2007.
Walter Bieri/AP Images

Triathlons are the ultimate endurance challenge. Participants swim, bike and run in an all-day race where even the world's fastest times still clock in at well above eight hours. The first modern triathlon was held on Sept. 24, 1974 and organized by the San Diego Track & Field Club [source: ITU]. The multi-sport competition proved an instant success, quickly growing to hundreds of sanctioned races worldwide and becoming an official Olympic sport at the 2000 summer games in Sydney.

Since 1989, the competitive sport of triathlon has been governed on a global level by the International Triathlon Union (ITU), which crowns world champions every year in 70 different race categories (including junior, under 23, elite and paratriathlon) and age groups (from 16 to 84-year-olds) [source: ITU]. There are also 120 National Federations that partner with ITU, including USA Triathlon, the sanctioning body for all American professional and amateur races.

Because of the highly competitive and physically intense nature of the sport, the ITU and USA Triathlon have established lengthy and detailed rules to make sure that all sanctioned races are safe, fair and fun for all participants.

Like athletes who compete in other organized sports, triathlon participants are assessed penalties for violating any of the published rules. For minor infractions, like unintentionally blocking of a passing lane or a false start, the triathlete might be instructed by a technical official to stop and wait for a set period of time (one to four minutes). Most ITU-sanctioned races have special "penalty boxes" located near the transition zones for athletes to serve their time [source: ITU].

For more flagrant or repeated infractions, triathletes may be disqualified from the race, suspended from further races for a set time or permanently expelled from all future competitions. In the name of fairness, penalized triathletes are allowed to protest or appeal their penalties with the ITU Competition Jury.

Even though there are rare instances of illegal doping and wildly unsportsmanlike behavior, the most common triathlon rule violations usually pertain to equipment and uniform violations. We'll start our examination of triathlon rules with the first leg of the race: swimming.

The length of the swimming portion of a triathlon depends on the age level and competitiveness of the race. The standard, or Olympic, swim distance is 1,500 meters, or slightly less than a mile. But there are many other popular triathlon formats -- sprint, team relay, long distance and ultra long distance (Ironman) -- each with its own swimming distance rules. The Ironman swim portion is a lung-busting 2.4 miles (3.8 meters) long.

Contrary to popular belief, there is no rule about what stroke you must use in the swimming portion of a triathlon [source: ITU]. Just about everybody opts for the classic freestyle, but you won't get kicked out of an Olympic triathlon for doing the doggy paddle. You can rest during any part of the swim leg by either standing on the bottom or holding onto a floating buoy. This rule helps prevent injuries or even death: Of the rare fatalities during triathlons, almost all of them occur during the swimming section [source: WISN].

The most controversial rules for the swimming portion of a triathlon concern the use of wet suits. Wet suits were originally used by triathletes only in cold, open-water races. Then athletes began to notice a welcome side effect of staying warm in the water: speed [source: Kent]. Wet suits are designed to trap a thin layer of water next to the body. That water is heated by the body's natural temperature, creating a warm protective barrier against the cold. As triathletes soon discovered, this trapped layer of water also increases the racer's buoyancy in the water. The less energy you expend trying to stay afloat, the more you can apply to pushing forward. Once the word got out, triathletes started using wet suits in all water temperatures, not just the frigid San Francisco Bay.

Now, let's talk about the biking leg of the triathlon. Don't forget your helmet! 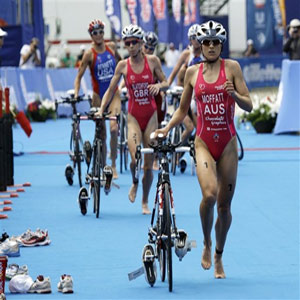 Running is the final leg of a traditional triathlon. In the standard, or Olympic, format, the running section is 10 kilometers (6.2 miles) long. Since running involves less specialized equipment or controversial clothing than cycling and swimming, there's less rulebook space devoted to it, but you can still be disqualified or penalized for "running foul" of triathlon law.

You can walk during the running portion of a triathlon, but please don't "crawl." In typical legalese style, the ITU defines crawling as "the action by an athlete of bringing three or more limbs in contact with the ground, either together or in any sequence, to enable forward propulsion" [source: ITU]. The rules don't explicitly mention piggyback rides, but those are probably covered in the clause forbidding "unauthorized assistance."

Since the running portion comes directly after the biking section, don't forget to take off your helmet. Running with a bike helmet is grounds for immediate disqualification. So is running without a shirt. And even though barefoot running is all the rage, triathletes must wear shoes at all times during the running portion and must also leave their iPods and cell phones at home. Breaking any of these rules can lead to disqualification.

Since running is the final portion of the triathlon, there are some very specific rules regarding the race's finish. Here again, the rule makers get to use their favorite word: torso. According to the ITU, a runner is said to have "finished" the race when "any part of the torso reaches the perpendicular line extending from the leading edge of the finish line" [source: ITU]. And in case you were unsure about what a "torso" is, exactly, the ITU defines it as any part of the body above the waist "distinct from the head, neck, arms, legs, hands or feet" [source: ITU]. That explains why runners always break through the finish line ribbon with their chests.

For lots more great information about triathlons, marathons and other endurance sports, run over to the links on the next page.