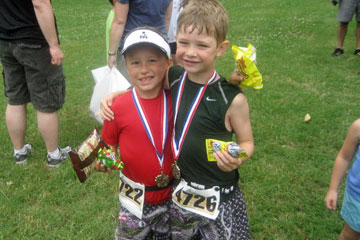 It wasn't all that long ago that completing a triathlon seemed to be a goal unattainable to anyone other than a semi-professional athlete with washboard abs. Times have changed for the swim/bike/run community, thanks to the fact that triathlon events are experiencing a major surge in popularity in recent years. Now, everyone from stay-at-home moms to high-powered executives gets their blood pumping by training for and competing in the occasional tri.

The numbers speak volumes about the massive growth of this Olympic sport. More than 1 million Americans competed in one or more traditional triathlons in 2009 alone -- a whopping 51.4 percent increase from 2007, according to a recent study conducted by the Sporting Goods Manufacturers Association. Throw in a few million more competitors in other countries, and you have a worldwide phenomenon. Growth has been steady in all age groups, with representation across the board from tiny tykes to senior citizens. In fact, adults 50 years of age and older make up 13.5 percent of total participants, with some athletes competing well into their 70s, according to a study by USA Triathlon. While it's difficult to state what the age groups are for every race, as they may vary from event to event, we'll take a look at two popular and fast-growing demographics: the 30 to 49 age group and kids.

Many people insist that the 30s herald the end of their athletic ability, often inhibited by to the demands of family, work and lagging metabolisms. Triathletes beg to differ. The most substantial participation growth has been in the 30 to 49 age bracket, with 65 percent of triathletes falling in this range, according to the USA Triathlon study. Some of the uptick in popularity among this group is due to increased television exposure of the sport since its addition to the Olympic Games. Others yearn for a new fitness challenge after exhausting the possibilities of conventional running or biking. Still more are avoiding obesity by ditching the couch in favor of intense training sessions, often alongside their spouse, friends or children.

Whatever their reason for signing up, completing a triathlon provides people with a reward that can't be quantified -- a sense of time well spent and of course, bragging rights. And that's not to mention the shiny medal at the finish line. This 30 to 49 demographic also has more discretionary income than other age groups, which is an important factor. Although many triathlons can be found locally, a lot of serious competitors choose to purchase high-end equipment and travel frequently to events. These expenses rack up quickly, which is why the average annual household income of triathletes is $126,000, according to USA Triathlon.

Triathlon age groups dip into the single digits, too. Skipping rope and playing T-ball is cool and all, but many pint-sized athletes are following in Mom and Dad's footsteps and signing up for their own triathlon events. Kid-centric triathlons are modified versions of the adult events, and they're popping up around the world. Although kid-friendly triathlons are shorter distance-wise and less physically intense, they're still challenging and fun. More importantly, they lay the groundwork for a lifetime of physical fitness.

Many triathlons have become multiday family events, with a race held for the parents one day and the kids the next. The International Triathlon Union encourages parents to prepare their kids for race day by guiding their training, reviewing the course layout and even visiting the course site if possible. Parents should also triple-check the working order of all equipment and provide necessary snacks, water bottles, goggles and other miscellaneous items. If the trend of young involvement persists, it's likely that the sport will continue its rise in popularity for the foreseeable future. 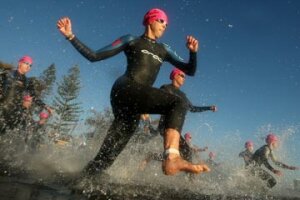 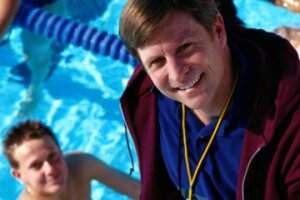 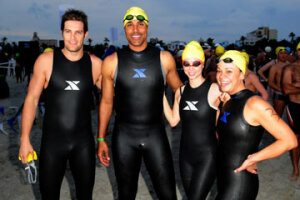