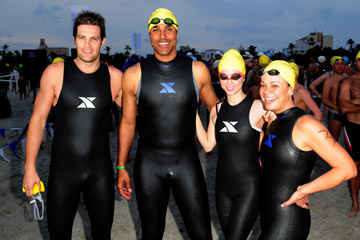 Triathlons, known for their grueling sequences of swimming, biking and running, are a relatively young sport. The first organized races began in the mid-1970s and their meteoric rise in popularity fueled a fast-track debut at the 2000 Olympic summer games in Sydney. Turns out, no other sport has earned Olympic status on such a truncated timeline. In fact, the discipline's global governing body, the International Triathlon Union (ITU), was only formed in 1989 -- about the time many of the sports' current fans were graduating high school [source: ITU].

Triathlon participants, like many athletes, are a competitive lot; it seemed a natural progression when early-on the ITU launched a program to rank triathletes -- not only from race to race, but from year to year. In the United States, for example, the USA Triathlon organization (a feeder to the U.S. Olympic team) ranks members to gauge how their performances stack up against other elite athletes [source: USA Triathlon].

The rankings, which number from 1 to more than 100 in each age category, are the result of a rule-heavy scoring system with built-in adjustments for each race course. Basically, if these races were classroom assignments, they'd be graded on a curve -- and the curve all depends on how fast the pacesetters are on race day.

The pacesetters are athletes who received an overall ranking from the organization during the previous year, and there could be any number of pacesetters in a race -- from one to more than 150. Each of these pacesetters is assigned a calculated pace time -- which differs from his or her actual race time -- as soon as the event comes to a close. This is done by dividing the runner's score in last year's race by 100, then multiplying the result by the finish time for the present race. The top 20 percent and bottom 20 percent of results are eliminated. Then the remaining scores are averaged into the par time [source: USA Triathlon]. This allows race organizers to gauge the course's speed and throw out any anomalies, like a very fast or very slow time.

Once a par time is established, the finish time of every other racer is compared to it. For example, if a par time is 70 minutes and George crosses the finish line in 80 minutes, George's score would be 87.5. In a move known as "gender grading," female racers get an additional 10 percent added to their scores. Some races also offer age grading [source: Tri-Miami]. The idea behind the percentage boost is to level the playing field.

These mathematical gymnastics are not uncommon in sporting circles, so most triathletes hoping to qualify for the 2012 summer games in London can probably do the math by rote. The World Triathlon Corp., organizers of the Ironman triathlon, uses a points system instead of the ITU's ranking method. Competitors in qualifying races at a variety of locations around the world earn points for their finish positions. The top 30 female and top 50 male point-getters qualify to race in the Ironman World Championship in Hawaii [source: Finish Line].

Should I stand or sit when riding uphill?
How Mental Triathlon Training Works
How Open Water Swimming Works