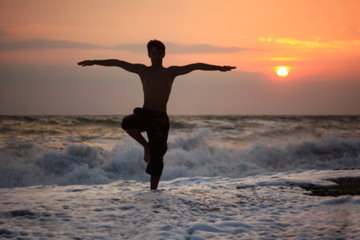 Triathletes are turning to the ancient practice of yoga to help them compete in the demanding multisport endurance competitions.
Hemera/Thinkstock

Triathlons are among the most demanding multisport endurance events being held today. Athletes pound through a 1.5-kilometer (0.9-mile) swim, a 40-kilometer (24.9-mile) bike race and a 10-kilometer (6.2-mile) run. There is no stopping and no breaks -- except when the athlete's mind or body cracks under the pressure and exertion.

To help prevent a breakdown, more and more athletes are turning to the ancient practice of yoga to help them in their pursuit of this modern sport.

Yoga's history is muddied, but adherents and historians agree it came into being thousands of years ago in what is now India. At its origin, it was a series of stretches and breathing exercises practiced by an enlightened group referred to as yogis. The ultimate intent of yoga was to bring mind and body together into a unified whole. By doing so, the yogi becomes one with the universe and transcended humanity's base needs. To become proficient at yoga -- to become a yogi -- was to attain the highest state of being.

Fast forward several thousand years and across a couple of continents. The core precepts of yoga have changed very little, though they've been adapted to today's lifestyle in many senses.

The spiritual path of yoga is often downplayed, but the physical and mental aspects of the discipline have risen accordingly. Yoga has also diversified what it offers to practitioners. Some variants offer a calming and stretching routine. Others offer a body cleansing routine accomplished through a hot room and specific poses. Others focus on strength, pre-natal conditioning or mental acuity.

Yoga for triathletes remains largely an idea at this time rather than a codified set of poses. Generally, it pushes a combination of strength, flexibility and concentration into its routines. With no specific type or school of poses an instructor will develop a very specific set of poses that work best for the athlete, or poses that are part of a larger program the athlete takes along with a group.

The idea is to build strength and flexibility, especially in the core muscle groups. This allows an athlete to perform better, suffer less injury, and the gentle movements and poses, or asanas, help promote healing. The mental portion of yoga allows for better concentration during a competition and a better ability to move beyond the place where a body thinks it can no longer go.

Keep reading to find out more of the benefits of yoga and a few asanas that may help get you started. 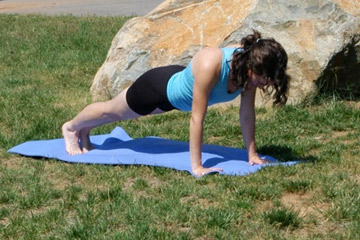 For more information about triathlon training, yoga and other related topics, follow the links on the next page.

What are the NSAIDs risks for triathletes?
How Pilates for Triathletes Works
How to Group Cycle Like a Pro