Browse the article How Triathlon Training in the Heat Works 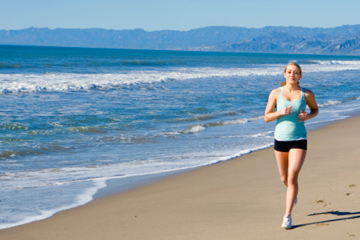 The triathlon, which was invented in 1974 and became an Olympic sport in 2000, consists of three different events and the transitions between them: a swimming event, a bicycling event and a running event. The distance that you'll be expected to travel in each of these depends on what type of triathlon you're participating in. The most popular is the Sprint Triathlon, where you'll swim for 750 meters (just under half a mile), cycle for 20 kilometers (roughly 12.5 miles) and run for five kilometers (roughly three miles). In an Ironman Triathlon, on the other hand, you'll swim 3.86 kilometers (roughly 2.5 miles), cycle for 180 kilometers (120 miles) and run for 42.2 kilometers (26.2 miles). That's the equivalent of running an Olympic-length marathon after you've already had a supersized workout of swimming and biking. No wonder they call it the "Ironman." Of course, there are more than a few Ironwomen involved in these triathlons as well.

Needless to say, a triathlete has to be in good shape. But even someone who starts out in great physical condition has to spend weeks training for these specific events as well as for the transitions between them. After all, climbing out of a body of water and jumping onto a bicycle isn't as easy as it sounds, especially when you're surrounded by a crowd of several dozen other triathletes. You'll find plenty of books and Web sites that will tell you what sort of activities to perform to get yourself triathlon ready and you'll need to keep training on a fairly regular basis in the weeks leading up to the event, with several hours a day devoted to building strength, endurance and skill.

But what if the weather doesn't cooperate? If you're a dedicated triathlete, we're sure you'd be willing to train in the rain and maybe even in the snow if you had to, but hot weather presents special challenges to all athletes and to triathletes in particular. Over the next few pages, we'll discuss the dangers of training in the heat (which can include disabling injury and even death), and we'll suggest what you can do to keep your triathlon training safe and effective even in the hottest weather.

Dangers of Triathlon Training in the Heat 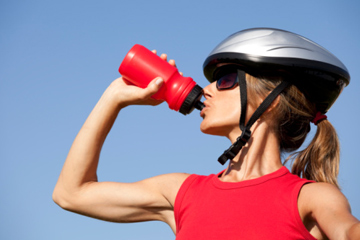 Obviously the triathlon event least affected by the summer heat is the swimming portion. Fewer things feel nicer in hot weather than being immersed in water. But running or riding a bicycle in hot, humid weather can sap the strength out of even the fittest athlete. There are a number of bad things that can happen to your body when it becomes overheated, but most of them are caused by dehydration, the loss of bodily fluids as you work out.

Your body needs fluids in order to function. The blood that pumps through your heart is a fluid and each of the trillions of cells in your body contains a little miniature ocean where most of the activity takes place that keeps you healthy and alive. It doesn't take much loss of fluid from your body before it stops running at peak efficiency. Fluids help keep your body cool and free from overheating. They keep your brain, muscles and nervous system operating at their peak efficiency, too. They even lubricate your joints so that you can move freely.

If you start to dehydrate, you'll notice troubling symptoms: You may experience cramps in your muscles. These are caused by the loss of electrolytes -- substances such as sodium (a component of salt), calcium and potassium that regulate your muscles and nervous system. As you lose electrolytes your muscles will become weaker and begin to contract involuntarily. These cramps are especially likely to strike your calves, where much of the important muscle activity in a triathlon takes place.

If you don't stop and rest (or take some of the precautions we suggest on the next page), you'll pass into a state of heat exhaustion. A warning sign of heat exhaustion is that you'll start feeling chills despite the hot weather. Then you may become dizzy and develop a headache. You might even become nauseous.

This is the point where you're in danger of heat stroke. Believe us when we tell you that you don't want this to happen. Your internal temperature will shoot up, possibly as high as 105 degrees Fahrenheit (40.5 degrees Celsius), even though you really don't have a fever. It's just your body's inability to get rid of the heat as quickly as it's building up inside you. Your brain will literally start to cook. You can become confused, go into a seizure or even lose consciousness completely. If you don't do something about it fast, heat stroke can be fatal.

But what should you do? Good question. And because you asked, the next page contains a number of ways in which you can keep your hot weather triathlon workouts safe without sacrificing your training schedule.

Precautions When Triathlon Training in the Heat 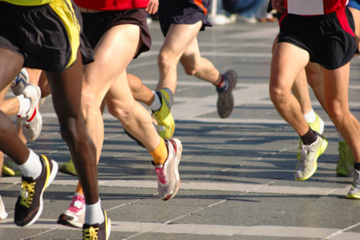 You can be in the early stages of dehydration long before you start to feel thirsty, so start hydrating your body a couple of hours before you begin.
iStockphoto/Thinkstock

The first rule of preventing overheating during triathlon training is to stay hydrated. That means you should consume plenty of liquids. It also means that you shouldn't wait until you become thirsty before you consume them. You can be in the early stages of dehydration long before you start to feel thirsty, so start drinking a couple of hours before you begin strenuous training.

Don't overdo it, though. It's also possible to overhydrate. How, then, can you tell how much fluid you should consume? A method that some athletes use is to weigh themselves right before working out and weigh themselves again immediately after. The drop in weight is roughly equivalent to the amount of fluid that the body has lost during training. A pound of body weight is equal to 16 ounces of fluid, so multiply the number of pounds you drop by 16 ounces and that's how much fluid you'll need to drink in order to not become dehydrated. Incidentally, an obvious sign that you aren't staying hydrated is the color of your urine. If it becomes unusually dark, then you should be consuming more fluids.

However, you shouldn't just consume any old fluid. Avoid drinks with caffeine, including non-decaf coffee, caffeinated sodas and energy beverages, because caffeine is a diuretic. It can actually make you less hydrated. Your best bet is to drink a combination of good-old-fashioned water and electrolyte-balanced sports drinks. These will not only keep you cool but will maintain your muscles and nervous system in proper working order. You can even carry them with you so that you can rehydrate while cycling or running. Most bicycles have a special rack for water bottles; you'll quickly learn to drink with one hand while steering with the other.

The second rule of preventing overheating is to rest if you feel any of the symptoms of dehydration coming on. These include weakness, dizziness, nausea, confusion and lethargy. Remember that you're only training, not running an actual race; there's no shame in sitting down in the shade on a warm day while your racing buddies are still out there risking heat stroke. Take advantage of your resting time to rehydrate and make plans for the rest of the day. As likely as not, your training buddies will probably join you for a moment of rest and some conversation.

And that part about having training buddies is important: Should you experience heat stroke, you may no longer be able to help yourself and you'll need a companion to lead you to a shady spot and to call for emergency assistance. And should you lapse into unconsciousness, make sure your companion knows in advance not to try to force liquids into your mouth. You could choke on them or vomit them back up. It's more important that they cool you with ice packs, if any are available, and elevate your feet above the level of your head. To avoid heat stroke in the first place, you might even consider carrying some ice with you on hot days, so you can place it on the back of your neck to help you stay cool.

Finally, should you find yourself needing to train in warmer weather than you normally do, take time to acclimate yourself. Your body will get used to the increased temperatures and adapt, but this can take a while -- up to ten days before you can return to your full training routine. Until then, take it a little easier than you normally would. One of the main reasons for becoming a triathlete is to stay in good health. You want to be sure that your training routine makes you healthier and stronger. If you're not careful, training in the heat can do just the opposite.

For more information about triathlon training and other related topics, follow the links on the next page.