Browse the article How Triathlon Training for Beginners Works 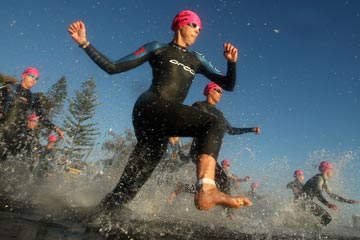 Plan ahead to make sure you've got the right clothing for each stage of the race, then wear it to practice to avoid any unexpected surprises.
Quinn Rooney/Getty Images

Whether you're ready to take your body to the next level in physical competition or you're just looking for a fun way to challenge yourself, triathlons offer a little bit of something for everyone. A triathlon is a race that consists of three activities completed back-to-back: swimming, biking and running.

Do you have to be an athlete (or even in shape) to take on such a monumental challenge? Nope, almost anyone can compete in a triathlon, no matter their size, shape or experience level. And the best part about training for, and competing in, a triathlon is that even if you're not in peak form to start with, you're bound to get in good shape in the process.

New triathletes can choose from races ranging from less than two hours to more than 15 hours, and covering anywhere from 16 miles (26 kilometers) to more than 140 miles (225 kilometers). Some common types of triathlon include:

If you're a beginning triathlete, you'll probably set your sights on a sprint race. It's a great way to get your feet wet, so to speak, and it's a good starting point if you're considering working your way up to more difficult events.

In all, it will take between 12 and 18 weeks to prepare and train for a sprint triathlon. In this article we'll look at what it takes to ready yourself for each part of the event, including the equipment you need, the techniques to develop and the amount of time to spend training. Preparing for a triathlon involves a lot of hard work, but the payoff (both physically and mentally) can be huge. So if you're thinking about becoming a first-time triathlete, read on to learn how to prepare yourself for what is sure to be an intense, but rewarding, experience.

The first leg of a triathlon involves swimming anywhere from a half mile (0.8 kilometers) to just more than 2 miles (3.2 kilometers), depending on the race you've chosen.

To begin, get your hands on the right equipment for the swim. At the very minimum, you'll need a well-fitting swimsuit that's comfortable and not baggy and a good pair of goggles that fit your face and don't leak. You also might consider purchasing anti-fog solution to keep your goggles from clouding up, a swim cap and a wet suit (if the race takes place in colder water).

Once you have your gear, you'll want to focus on your swimming technique. Good technique produces efficiency, and efficiency will help you get farther and last longer in the race. That's why a large part of your triathlon preparation will include mastering proper technique in all three segments -- swimming, cycling and running. In swimming, there are three major technique areas to focus on: your stroke, your position in the water and your breathing.

For a sprint triathlon, you should train in the pool about two or three times each week. Once you've mastered the moves for your chosen stroke, it's important to work on your endurance. Even in a sprint race -- the shortest of the triathlons -- you'll be swimming for about 15 to 20 minutes, so you should build up your stamina to allow you to swim for that long [source: Beginner Triathlete].

Now that you have a good idea of how to start preparing for the swim portion of a triathlon, it's time to get back on dry land. Keep reading to find out about training for the cycling portion of the race.

The Importance of Resting

Just about every triathlon training book, magazine and website stresses the importance of incorporating rest into your regimen. You absolutely do not want to train seven days a week -- you'll tire quickly, lose your motivation and very likely injure yourself. When planning your training schedule, allot at least two days each week for resting. Let your body recover and it'll reward you in the long run.

The second part of a triathlon involves a bike ride, but triathlon biking isn't your ordinary pedal through the park. Even in the shortest triathlon you're in for at least 12 miles (20 kilometers) of nonstop cycling, and in a sprint race that means biking anywhere from 30 to 55 minutes [source: Beginner Triathlete].

Perhaps more than in any other leg of the triathlon, having proper equipment is important in this portion of the race. At the very least, you'll need a racing bicycle, a bike helmet and a bike tool kit (to make any unexpected repairs during the race). Just as important as choosing the right bike is making sure your bike is adjusted properly to fit you, the rider. It's so important to have a good bike fit -- handlebar height, seat height and tilt, crank position and so on -- that you might consider getting it adjusted professionally at a bike shop. An improperly adjusted bike makes for a long and uncomfortable ride, so it's worth the time and effort to ensure the right fit.

For cycling training, try to get in about an hour of riding once or twice a week. Practice on a course similar to the one you'll be racing on. If the upcoming course is hilly or winding, you'll want to make sure you can handle the bumps and curves.

Now let's get a little closer to the ground and switch over from cycling to running. In the next section, you'll learn what it takes to keep up the pace and finish the race.

The third and final leg of a triathlon is the footrace. In a sprint triathlon, you'll run just more than 3 miles (5 kilometers), which takes anywhere from 18 to 45 minutes [source: Beginner Triathlete]. That's a serious hike after swimming and cycling for about an hour, but if you've made it this far, you're almost to the finish.

As with swimming and cycling, running technique can be pretty important, especially in a race. Technique in running is largely made up of four things: posture, stride, pace and breathing.

Unlike swimming and cycling, running is an impact sport and can be pretty rough on the body (especially the knees). It's a good idea to change up your training routine daily, so don't run two days in a row, and make sure you give yourself plenty of time to rest and recover. If you're training for a sprint triathlon, try to get out and run two to three times each week for 20 to 30 minutes.

Now that you've got an idea of what it takes to train for a triathlon, let's look at some common beginner triathlete mistakes to keep you from looking like a newbie on race day.

Training with a Friend

Let's face it -- training for any sport is hard work, and sometimes it's difficult to find the motivation to keep at it. You don't need to hire a coach to keep you motivated to train for a triathlon, but training with a friend can help keep you on track. Not only is it great to have someone to encourage you to keep going when you think you just can't take another step (or swim another stroke or pedal another second), who else can you commiserate with when you're in pain, or celebrate with when you finally finish the race?

Avoid looking like a novice by taking into consideration some of the most common beginner triathlete mistakes:

Learn more about triathlons, triathlon training and other competitive sports by visiting the links on the next page.