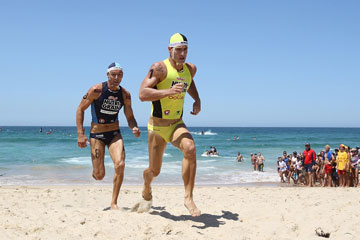 Since its 2000 Olympic debut in Sydney, the triathlon -- which combines swimming, biking and running -- has experienced a surge in interest among casual athletes. There were 1,891 USAT-sanctioned events in the United States in 2009 -- more than twice the amount hosted in 2004 -- with more than 1.2 million Americans participating [source: USAT].

The challenge of doing something as physically demanding as a triathlon is a powerful draw for competitors. According to a Sporting Goods Manufacturers Association (SGMA) study released in May 2010, more than 95 percent of participants do it to test their own endurance [source: The Tribe Group].

It's not hard to see why the sport is so popular. After all, it's much more demanding than your neighborhood fun run, where any couch potato can show up and usually finish. It takes a higher level of commitment to be a triathlete. Just being in decent shape isn't enough. You have to be at least marginally proficient in three different disciplines -- comfortable in the water, in the saddle and on the road. After stacking all three back-to-back-to-back, the sense of accomplishment goes beyond a T-shirt or a finisher's medal. Calling yourself a triathlete is an ego boost you won't get anywhere else.

So how does one prepare to take on a tri? As the popularity of the sport grows, so does the training community expanding around it. Unlike athletes who focus on one area such as running or cycling, triathletes tend to move in groups. Covering miles upon miles on long training rides can be tedious alone, and open-water swimming in a group is much safer than hitting the waves by yourself. Since most people are less likely to flake out on their training routine when there are others around to encourage them onward, the motivation and encouragement from a group can spur better performances and help athletes get to the finish line without burning out.

In this article we are going to take a look at triathlon training clubs, what benefits they offer participants and how to get one started.

How to Start a Triathlon Club

Starting a training group is an attractive alternative to going it alone, but for athletes interested in more than an informal gathering of people with a common goal, there are a few guidelines that can help you through the process.

First, determine the goal of your triathlon club. Will its objective be to help newbies finish their first race? Is it an opportunity for veteran triathletes to sharpen their skills in certain areas? Will it cater to people targeting a specific event, or simply for athletes who live in a certain area?

Triathlon training groups are as varied as the athletes themselves, so establishing which type of racer you're interested in attracting can help. More than three-quarters of all competitors in 2009 competed in sprint-length events, which usually consist of a 500-meter (547-yard) swim, 12-mile (19.3-kilometer) bike ride and a 5-kilometer (3.1-mile) run [source: USAT]. These are the most popular distances because they are also the most accessible, meaning they attract the most beginners.

Once you've figured out who your target audience is, you should register your group with USAT. Registration runs $50 annually, and association with the sport's governing body has its advantages. For example, your club will be listed on the organization Web site by geography for people interested in joining. You and your club will also be eligible to receive discounts from USAT corporate partners on a range of goods and services from racing equipment to physical therapy. Event-registration discounts are also available for USAT clubs.

USAT also recommends that you purchase insurance for your club. There are risks inherent in any athletic endeavor, but triathlons can be especially hazardous. Bikes and cars sharing the road, throngs of people swimming in open water and the fatigue of day-to-day training can compound the risks.

For clubs with fewer than 41 members, general liability coverage costs $250 a year and underwrites all associates during club activities. For groups larger than 41 members, the premium is $6 multiplied by the number of members. USAT also provides event insurance, which is required for all participants, and can be purchased on an event-by-event basis. Usually this is part of the entry fee.

As a club organizer, it's also recommended that you purchase directors' and officers' liability coverage. This offers protection of personal assets if the organizer is ever found liable for any wrongful act. A $1 million policy can be purchased for $625 annually, and $2 million worth of coverage is available for $925 annually.

For much more in-depth information about how to organize a USAT triathlon training club, read the step-by-step manual.

Next up, we'll look at more benefits of starting your own club. 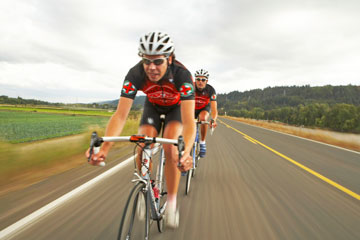 Covering miles upon miles on long training rides can be tedious alone. The motivation and encouragement from a group can spur better performances and help athletes get to the finish line without burning out.
Thomas Northcut/Photodisc/Thinkstock

Gathering athletes of varying experience and skill levels can soften the intimidation factor and keep training sessions fresh by alternating leaders. For example, a popular workout to get faster during the running portion of a triathlon is to do hill repeats. This is exactly what it sounds like, running up a hill over and over again. And by alternating which group starts first for each interval, everyone works harder.

When the slower athletes take a 30-second head start, they push their pace so they don't get passed. Middle-of-the-pack athletes, starting 30 seconds in front of the speedsters, push their pace because they have the fastest in the group bearing down on them. Finally, the fastest runners push it because they find themselves in unusual role of bringing up the rear [source: Hanc].

Joining a triathlon club has several benefits that go beyond pushing you toward your ultimate goal of finishing a race. The social element can be just as helpful as the physical training. Many clubs organize travel for events and gather for prerace dinners, as well as race-day pace groups. Most are led by professional coaches, or at least experienced triathletes, so they can offer tips and suggestions of form, technique and training plans. The voice of experience can be a powerful tool for beginners.

Members of USAT clubs are eligible for the group's National Club Championships and Regional Club series, where you win awards and prizes. Other benefits -- not exclusive to USAT training groups -- are discounts at area sporting goods stores and access to hands-on clinics or expert lectures on the finer points of racing.

In a discipline like the triathlon, knowledge is just as important as stamina. Knowing the best techniques for transitioning between the swim and the bike ride (and from the bike ride to the run) can make a big difference. Nobody wants to look lost in the transition area -- especially beginners. This is why some groups place high importance on getting experts, coaches and race organizers to come speak to their groups.

Hands-on clinics can also be a big draw for training groups. Learning the intricacies of your equipment, how to quickly change a flat tire or the best way to increase the efficiency of your swimming stroke are the minutiae of tri training that puts it in different category from running.

Getting involved with a fun, enthusiastic training group can help athletes at all levels and turn the challenge of completing one race into a lifetime activity.

Ready for your next triathlon? We have lots more information to help get you started on the next page.