Browse the article Is treadmill running beneficial for triathletes? 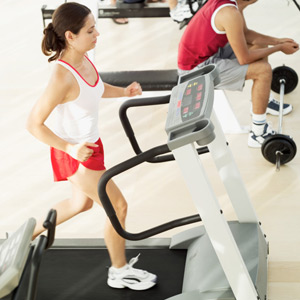 Will treadmill running help or harm a triathlete?
Stockbyte/Thinkstock

After finishing the cycling portion of a standard triathlon, only 6.2 miles (10 kilometers) stand between you and the finish line. Exhausted, you hop off your bike, grab a quick drink and change shoes to run the remainder of the race on foot. Will your months of training pay off?

Though it takes dedication and endurance to finish a triathlon -- a race consisting of swimming, cycling and running segments -- there seems to be no single path to success. Some triathletes prefer to train solely outside, while others supplement exercising inside, too.

Ideally, the best training for a triathlon would consist of swimming, cycling and running in conditions similar to the ones triathlete would experience in a race. But when freezing weather or sweltering heat persists, it might be a good idea to hop on the treadmill to avoid a potentially dangerous workout outside. Treadmills can be useful tools if used correctly in a workout regimen.

In addition to providing an opportunity to train while stuck indoors, short training sessions on a treadmill can improve your running speed in a triathlon by allowing runners to create inclines that simulate hills while maintaining a consistent, faster pace. Many treadmills also provide heart monitors that can help the runner keep track of his progress.

Ultimately, triathlon coaches agree that it's not a matter of whether a triathlete should use a treadmill, but how he uses it. For triathlon training specifically, longer workouts are not as effective as speed training, which should be performed in manageable intervals. While altering factors such as incline and speed, short sets performed on treadmills can keep your neuromuscular system healthy, help boost blood lactate threshold rates (the ability to maintain an intense activity) and improve leg strength [source: Bernhardt]. The level of control treadmills provide makes them a valuable workout tool year-round -- even in combination with outdoor training.

Treadmills may have their benefits in triathlon running, but are there any disadvantages? Find out on the next page.

Cons of Triathletes Training on a Treadmill 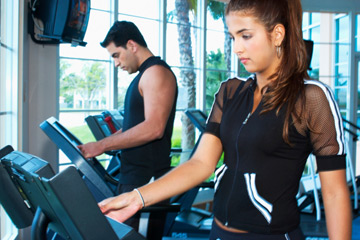 It's more a matter of how you use a treadmill, not whether you use one.
Medioimages/Photodisc/Digital Vision/Thinkstock

On the other hand, there are a few disadvantages of training for a triathlon on a treadmill. For starters, the surfaces of treadmills are soft and reduce shock, and they're not always similar to outdoor surfaces traversed in a race. Some running experts say that the variability of the ground -- whether it's dry, wet, hard or soft -- actually enhances your muscles' ability to react quickly to different surfaces in a race [source: Morris]. So, it's a good thing to train outside when possible, but don't be afraid to head indoors during icy weather.

Treadmill training can also take a toll on the runner's form. While running in place on a treadmill, it's often difficult to maintain the slightly forward lean that's necessary to keep pace without wasting energy. Too much treadmill training may result in a more bouncy form that isn't as efficient. Another problem associated with treadmills is the absence of wind. When you're running outdoors, you have to work harder to battle the resistance created by moderate wind. This difference can usually be remedied by setting a 1 or 2 percent incline, which creates a similar resistance [source: Morris].

Treadmill training can also be potentially harmful if the runner doesn't know how to use the machine or pushes himself to maintain a speed that's too fast. Mentally speaking, staying engaged while training on a treadmill can be a challenge. Since the runner doesn't feel as if he's going anywhere, it's easy to get bored or anxious. Triathlon trainers suggest to break up workouts in smaller intervals, watch TV or listen to music to avoid boredom.

For lots more information on training for a triathlon, see the links on the next page.