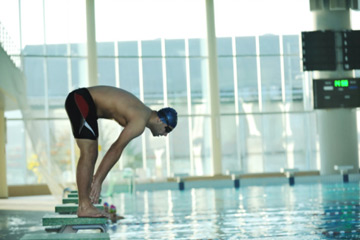 When a few tenths of a second can mean the difference between winning a gold medal and going home empty-handed, swimmers are willing to do drastic things. Reducing drag and anything that causes excessive resistance in the water is one essential step in competitive swimming. Companies even borrow ideas from NASA and sink millions of dollars into developing cutting-edge suit technology [source: Boyle].

But if you can't afford a special NASA-designed swim suit, there are other ways to reduce drag. Today, most swimmers shave much of their body hair off before a big competition. The practice gained popularity after the 1956 Olympics, when Murray Rose and Jon Henricks came shaved and won gold medals for Australia [source: Montgomery].

Many argue that, even if shaving doesn't help reduce drag, it gives swimmers a psychological boost because swimmers feel invigorated in the water after shaving. It's certainly understandable, because razors strip dead skin cells off the body in addition to hair, exposing a fresh layer of sensitive skin cells. This results in hypersensitivity to the water.

Olympic swimmer Janet Evans, for instance, has said that her team would agree not to shave at all until the night before a competition. The next day, the water would feel "exhilarating" [source: Evans].

But in an attempt to settle the issue, researchers have investigated if a shaved body actually glides through the water faster. A 1989 study found that it does, and the authors concluded that it's because shaving does indeed reduce drag [source: Sharp].

Swimmers usually refer to "taper and shave," which is a strategy used in the days immediately preceding a big competition. Tapering refers to rest from training, and coaches still disagree about how effective this is. And although shaving is more or less scientifically proven to be effective, it isn't without controversy. Some argue that youth shouldn't shave, because they aren't mature enough to handle the disappointment when their performance suffers in subsequent races.

It's also true that first-time shaves can have disastrous results if you aren't careful. Before you take a razor to your skin, look over our shaving tips on the next page.

Body shaving can be especially intimidating for males who have extensive and thick body hair. If this is the case for you, it's best to start the shave with electric clippers to easily trim the longer hair before you start a closer shave. Keep in mind that you only need to shave the areas of your skin that won't be covered by your suit.

A word to the wise: Let someone else take care of your back and elbows, since these are difficult to reach and more likely to result in nicks.

A close shave is easier and more pleasant with shaving cream and warm water. Short strokes are best for a closer shave, and they help avoid razor burn, too. Some prefer to rinse the razor often between strokes; however, some argue that this dulls the razor and instead recommend shaving against the grain, and then again in the direction of the grain to clean off the razor [source: Kostich].

We should note that although shaving against the grain will give you the closest shave, this may lead to ingrown hairs [source: Springen]. However, applying rubbing alcohol on the skin after shaving can help prevent these in cuts (as well as refresh the skin) [source: Kostich].

Speaking of post-shave skin care, you can apply baby oil to help reduce any dry, burning sensation. If shaving tends to result in bumps on your skin, cortisone creme can help get rid of these [source: Springen].

Even with trying to observe all these precautions, however, you might slip up and nick yourself. These open cuts can be prone to infection, especially if you plan on swimming in open water. This is why it's best to shave the night before rather than the day of the race. Don't worry -- you'll still get that exhilarating feeling when you dive in the water.

Many believe that hair grows back thicker and darker after shaving it off for the first time. However, experts maintain that this is a misconception. The new growth will feel stubbly simply because it's shorter [source: Gibson].