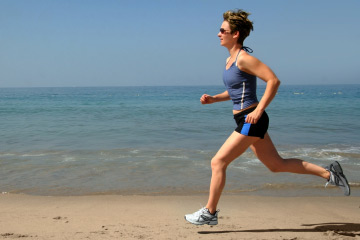 Soft surfaces can give your running performance a boost.
©iStockphoto.com/barsik

Exercising and staying fit is often easier and more rewarding when you have a defined goal to work toward. For many, that goal is a triathlon. A true test of endurance and strength, the triathlon competition consists of courses of swimming, cycling and running. The competition is popular partly because of the well-rounded physical fitness needed to do well at all three. A good training process will help get you there.

Training for such a competition can be grueling, but knowing the best training methods will help ease the process. If the running part is your Achilles heel of the competition, and if you're struggling to improve your running performance, one thing that can help is switching to a soft surface for your training.

Many beginners overlook the importance of surface. And those in urban areas often run on concrete and asphalt simply because it's most convenient. But you can't underestimate the difference a particular surface makes. If you have any doubts about this, try running on the sidewalk, and then switch over to soft sand on the beach. You won't be able to run nearly as fast on the beach, and you'll tire yourself out quickly, too.

Ever wonder why sand is so much more difficult to run on? When your foot hits soft sand, it absorbs much of the energy your foot is exerting downward. So when you push off to move forward, a lot of the energy goes down into the sinking sand rather than giving you leverage to push yourself off.

So why, for heaven's sake, would many training experts recommend using soft surfaces such as sand to train rather than hard surfaces, where you can get your best running speeds? We can tell you: It's not just for the pleasant sound of the waves and seagulls. It's because it'll give you a more vigorous workout. Still, there are limits and disadvantages to soft surface training as well. 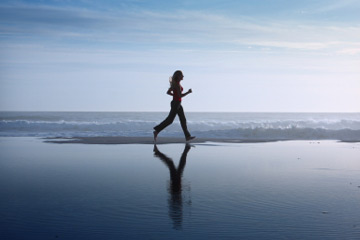 Running close to the shore, where the sand is damp, can give you a good workout.
©iStockphoto.com/sculpies

The ideal training surfaces are in between hard, unforgiving concrete and soft, cushy sand. These two opposites do offer a good contrast, however, for understanding the principles involved in harder and softer running surfaces. For example, it helps you understand why, in general, you'll run faster on something hard like concrete, and that foot-to-surface contact time is longer on softer surfaces. Let's go over the range of different surfaces:

Concrete. Probably the hardest surface to run on, concrete is also usually the most convenient for runners in urban areas. One advantage to concrete is that it's typically very even, unlike many of nature's soft surfaces.

Asphalt. Made from crude oil tar and mixed with sand or gravel, asphalt is slightly softer than concrete (which is cement with water, sand and gravel). Although they recommend it over concrete, running experts don't really consider asphalt a "soft surface."

Gravel. Many parks and running trails in suburban areas are made of crushed gravel, which experts consider a soft surface that's ideal for triathlon run training. It's a good middle-of-the-road choice.

Track. Often made from rubberized and synthetic material, tracks vary in hardness. However, they usually offer a moderately soft surface on which to run.

Treadmill. Having a treadmill inside will protect you from the elements and offer decent shock absorption.

Dirt. Running on plain dirt paths will offer some shock absorption, but it can get muddy or uneven during bad weather.

Grass. Grass adds a little more cushion than dirt, but can also hide rocks and uneven patches that you could trip on.

Wood chips. Many experts cite trails made of wood chips or sawdust as their favorite surface to train on. They absorb shock very well and, unlike dirt and grass that can get muddy, these trails stay pretty sturdy after rain.

Damp sand. If you're looking for a good workout on the beach, most experts recommend staying near the shore where the sand is flatter and more compact.

Soft sand. Because it's so uneven and will absorb most of your running energy, soft sand is generally considered too difficult to train on.

So what difference will it make what surface you run on or how shock-absorbent it is? Next, we'll discuss the many advantages of soft surface training. 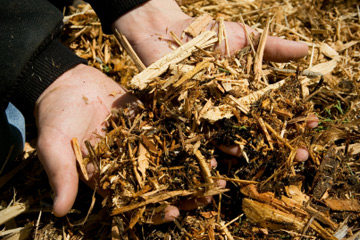 Vary your surfaces, but transition slowly into something new.
©iStockphoto.com/SweetMommy

Though hard surfaces give a great push for you to run faster, you'll probably be able to run for longer periods of time and even go farther on soft surfaces. Some experts claim to get up to 25 percent more mileage on softer surfaces like dirt [source: Glover].

Perhaps the most important reason to train on soft surfaces, however, is that it it puts less strain on your body, reducing the risk of injury. Keep in mind that out of the three events in the triathlon, running is the hardest on your body. Hard surface running is tough on your joints and shins and can lead to stress fractures. Soft surface running, on the other hand, will improve your lower leg strength to help avoid shin splints and ankle sprains [source: Russ]. It's also good for stabilizing torso muscles [source: Bean].

Some soft surfaces can offer runners a more well-rounded workout, because you'll be forced to shift and adjust to uneven terrain, using muscles you might not on flat concrete. Even though dirt and grass come with unexpected rocks and crannies, your body learns to adjust to rugged terrain, which in turn helps strengthen ankles [source: Bean].

Conversely, perfectly flat surfaces overwork certain muscles and underwork others. If you run on a track, for instance, you should at least reverse directions occasionally to avoid repetitive stress on the outside leg [source: Noakes].

Beware of drastic changes in surface, though, which can lead to pain and injury, especially if you aren't already in excellent shape. For this reason, many experts recommend slowly transitioning to a new kind of surface if you aren't used to it: Take only short runs every other day on a new surface before you incorporate it into a daily routine [source: Glover].

Varying your surfaces will also help you avoid the monotony that comes with running on just a track or treadmill. It may sound frivolous, but monotony can discourage many from continuing training.

So fight boredom, give your joints a break and hit the trail.