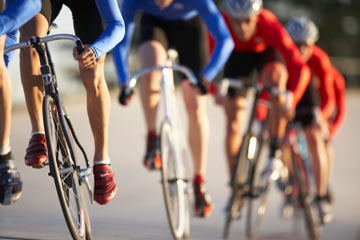 A cyclist's optimal amount of pedal float -- the degree of mobility your foot has when it's clicked into place -- depends on a variety of factors.
Ryan McVay/Digital Vision/Thinkstock

Pedal float doesn't refer to what happens when flowers are submerged in water -- not, at least, in the world of cycling. Instead, pedal float refers to the amount of mobility your foot has when it's clicked into the pedal of a bicycle. Note the use of the word "clicked" rather than "clipped." Pedal float is only an issue when using clipless pedals, into which your feet click with the help of a cleat. Don't worry -- it's confusing even to the pros.

Why is pedal float important in cycling? There are a few reasons, the most important of which is its impact on the muscles and joints of the body, particularly the knees. When we talk about pedal float, we're talking about the degree of rotation the foot has in swiveling from left to right while clicked into the pedal. In other words, the foot shouldn't be able to float up and down -- that would cause the rider to lose thrust during pedaling. With the foot firmly attached to the pedal, the rider is able to maintain force on the upward as well as downward portion of the revolution. This significantly increases riding performance.

A similar dynamic applies to the right to left movement of the foot in the pedal. Generally speaking, the more tense the connection with the pedal, the more force is exerted during the revolution. This is why a lot of competitive cyclists prefer less float in their pedals. The catch is that this tension can put a lot of strain on the knees. For this reason, people with knee issues are usually advised to ride with a high degree of pedal float. Novices, newbies and recreational riders also tend to ride with a higher degree of pedal float.

The optimal amount of pedal float for an individual cyclist depends on a variety of factors, including cleat position and how your foot naturally positions during times of exertion or hard pedaling. The best way to determine the degree of float that's right for you is through trial and error. Some pedals can be adjusted for float. Others may need to be replaced in order to achieve the desired results. The best thing to do is seek help from the staff at your local bike shop -- ideally from a professional bike fitter or someone with knowledge of pedal mechanics and their impact on performance and the body.

And remember that subtle differences in pedal float can significantly impact your cycling performance, so consult an expert if you're interested in maximizing your ride.