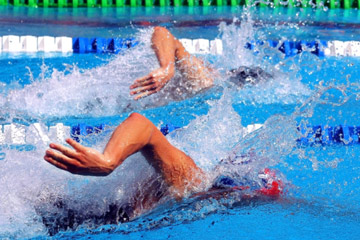 The off-season might be a good time to improve your swim stroke.
Hemera/Thinkstock

We've all seen prize fighters and other athletes swell to Macy's Thanksgiving Day Parade balloon proportions in the off-season -- sometimes so much so that they barely resemble the lean specimens we knew from fight night or game day.

Without a clear goal or the daily discipline of training, their off-season lifestyles can degrade those once-athletic physiques into out-of-shape messes. Such excess means the athletes will also have to work inordinately hard to get back into shape. For those of us recreational athletes without a high-priced training staff at our disposal, this holds particularly true. It would be much easier to simply stay in shape -- albeit at a lower training intensity than during one's competitive peak.

How do you do that? Well a person can start by determining his or her level of fitness and working to stay within a certain percentage of that level. Fitness works on a sliding scale rather than being an absolute measurement, but you can gauge it in a number of ways:

This is where it pays to consider yourself both a bit of a science experiment and a scientist. You'll want to carefully record and chart your observations about where you stand with these measurements, at least weekly. The reason is, armed with a few weeks' data, you can begin to identify trends that provide evidence of strong areas, weak areas and best courses of action.

Ideally, you want to maintain and perhaps even build upon a base level of fitness in the off-season. For a beginner, this may mean the ability to run at least a few miles per week. On the other end of the spectrum, a regular Ironman competitor might think nothing of doing a marathon's worth of running in a single training week.