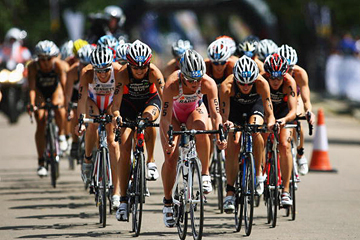 Mental training will help you prepare to race in a tight pack, like these women riding on July 24, 2010, in London's Dextro Energy Triathlon Women's Race.
Mark Wieland/Getty Images

For the spectator, a triathlon consists of dozens, sometimes hundreds, of incredibly fit athletes swimming, cycling and running in a competition that tests strength and endurance. Well-toned, well-tanned arms and legs move together, often in a pack and sometimes dangerously close to colliding. After a couple of hours, sometimes more, the top triathletes cross the finish line, and the race is over.

For triathletes, though, the race is just one of many brief but long-anticipated events for which they have been preparing for months, if not years. Physical training in each of the three legs of the triathlon is essential. Additionally, triathletes must practice their skills in transitioning from one leg to the next.

After all this training, many top triathletes are in similar physical shape when they arrive at the starting line. What sets them apart on race day, though, is not the physical race, but the mental race. Some of the mental aspects of triathlon, as in many endurance sports, are the ability to focus on the goal, ignore pain, keep frustration and anxiety in check, and avoid distractions.

Most triathletes claim the mental side of the sport has the greatest impact on how they perform. Despite this claim, these same athletes often report spending little or no training time on mental preparation. Triathlon coach Joe Friel says, "The mental aspect is an area that many athletes can improve on. There are many aspects of sport psychology, the most important of which are confidence, motivation, concentration, and relaxation" [source: Taylor and Schneider].

This article will describe the mental preparations you can make as a triathlete that can carry you through both training and race day. There are also some useful mental training tips you can keep in mind while your mind is in the race. 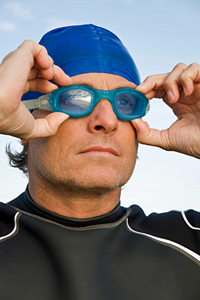 Imagine for a moment you're a triathlete who's "in the zone." Everything is working flawlessly. Your movements are comfortable and natural, and your body automatically knows what to do without your thinking about it. You're completely familiar with your equipment, and when you have a setback, you handle things quickly and keep going without any break in your pace. Your mind is totally focused, and nothing can distract you, even the scenery, rain, cold, heat or the massive five-man cycle collision you just avoided.

That's the scenario you're training for when you add mental training to your triathlon routine. To be your best, you want to perform at a consistently high level even in the worst conditions. Start by ensuring you're doing everything you can for your physical training so you can minimize the physical distractions that can impact your mental training. This includes being well-conditioned, well-rested, healthy and getting adequate nutrition in your diet.

In their book "The Triathlete's Guide to Mental Training," Jim Taylor and Terri Schneider list the following three things that make up the foundation for your mental training:

Building on this foundation, bring your triathlon training into perspective. First, accept that in triathlon, as with anything in life, you'll have your ups and downs. It's how you respond to those that make the difference in whether you're mentally prepared.

Second, remember that triathlon shouldn't be so important to you that it changes from a positive to a negative impact on your life. A negative feeling about training may tempt you to dread or avoid it. Eliminate those negative feelings by refocusing on why you love triathlon, whether it's the exercise, socializing, competition or the feeling of accomplishment when you finish the race. Remember that training is a process, and pressing forward with your training schedule will help hone the mental endurance you need on race day. 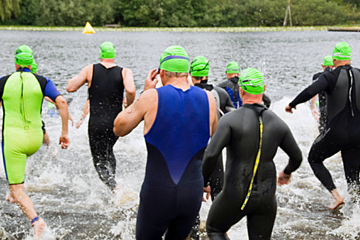 When your mind is as ready for the race as your body, you can have one of the best triathlon performances of your life. With mental training, you can keep your emotions under control. This lets you concentrate, avoid distracting thoughts or events, ignore a sense of frustration when you're falling behind, and keep your confidence in check when you're doing well. Mental training also helps you overcome pain, when your muscles are pushing as hard as ever under the pressure of the race.

At the 1997 International Triathlon Union (ITU) World Triathlon Championships, Michellie Jones proved she had trained to handle the mental stress of the race. Jones was knocked off her bike and got tangled up in a fellow competitor's bladed wheel spokes. She recovered and carried on, reminding herself she had done the training she needed to get there and to stay strong. She got weaker through the race, but pushed mentally and physically to finish in third place. It wasn't until after the race that she saw blood on her shoes from the cuts from the cycle incident, requiring a few stitches in each foot. Even though she came in third, Jones was proud that she stayed positive and tough until she crossed the finish line [source: Taylor and Schneider].

Sometimes the success you achieve in triathlon isn't just in the race itself, but the challenges you've overcome to get there. For example, Michael Pate authored a book about his triathlon experiences called "When Big Boys Tri," describing how he went from being a 370-pound (167.8-kilogram) couch potato to finishing his first triathlon [source: Pate]. Also, experienced triathlete Kelly Lear-Kaul decided to put family first after having a baby, and she learned to work family time into her training schedule as she toned her body back into race shape [source: Delcour]. For challenges like these, mental focus during training can be as important as it is on race day.

Scientific studies have shown that hypnosis may help you reduce anxiety and better focus on a single message. If so, hypnosis recordings designed to help you focus on that message may help you visualize the triathlon success you want to achieve. Those selling the recordings boast "proven results" with quotes from those who have used them. Remember, though, that hypnosis recordings are no substitute for physical training or for the mental strength and endurance developed during that training.

Triathlon Web sites have lots of great tips for mentally preparing for a triathlon. The following are some of the best we've found:

Set realistic-but-scary goals -- You should know you can accomplish the goal you set, but it should also require your fullest physical and mental focus to accomplish it. For example, it may be unrealistic to expect a 4-minute-mile (1.6 kilometer) pace in the last leg of your triathlon, but it may be realistic to shave off 10 seconds per mile by pacing yourself better. That's a lot of time to trim, but if it's a trouble area for you, it may be the mental push you need during training [source: BeginnerTriathlete.com].

Use "chunking" to master the mental race mile-by-mile -- Chunking, or performance segmenting, is the art of breaking a larger task up in your mind and focusing on it in smaller tasks. For example, instead of thinking of the whole race, or the entire swimming leg, think of the race from the start to the first buoy. Then, later, focus on the race from the last buoy to the shore. These manageable chunks can keep you from feeling overwhelmed by the larger race and help you develop your pacing strategy [source: Jacobson].

Track your progress -- If you're going to put in the time to train, stay aware of your progress by tracking. There are a number of devices you can use to track your training progress, including heart rate monitors, diet and nutrition software, pace meters and cycling computers. Select the devices you want to use for tracking, and keep a journal of what they report for each workout.

Have confidence in what you've accomplished so far -- When you first get started training for a new event, and even just a few weeks into that training, the goal you need to reach before the event may seem a long distance ahead. Don't lose sight of where you've come from to get to that point, though, whether it's reducing your running time by 10 seconds per mile, or just getting from your couch to the sidewalk [source: Newsome].

Stay focused on your goal, not on others' performances -- The only goal that should matter to you, both before and during the race, is your own. You know the pace you need to keep to reach your goals. For example, view a competitor passing you as a possible extra motivation to speed up, but don't think of it as "falling behind" [source: Pate].

Redefine "success" -- Think of success not as winning the race or qualifying for another event. Think of it as performing to the best of your ability and enjoying the experience [source: Taylor and Schneider].

Take a playful approach -- To avoid taking your training too seriously, which can result in a negative feeling toward it, turn it into something positive and playful. Make your training your "play time" so it helps reduce your stress instead of creating it [source: Evans].