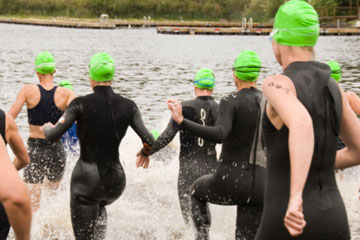 Training for a triathlon isn't easy. Whether you're looking to complete a sprint, Olympic, half Ironman or Ironman triathlon, you'll spend a lot of time at the track, on the bike and in the pool. But these hours of pavement-pounding, heart-pumping workouts can actually be counterproductive if you don't incorporate enough low-intensity exercise into your training regimen.

Put simply, low-intensity triathlon training consists of swimming, biking or running at below race pace. It's a critically important part of any triathlete's workout routine because it helps increase the body's aerobic fitness level without significantly contributing to overuse injuries. Beginners will find low-intensity exercise particularly helpful as their bodies adjust to a level of activity to which they're not accustomed. Even elite triathletes, who often train for 40-plus hours per week, include low-intensity training in their routines.

There's considerable controversy among triathletes and coaches about exactly what the balance should be between high and low intensity training, especially when it comes to running. Proponents of low-intensity workouts contend that running as many miles as possible at a slower pace is most beneficial, while those who support high-intensity exercise feel that it's better to run fewer miles at a faster pace. There are valid arguments to support both points of view. High intensity workouts help train your body to pick up the pace when passing someone on the bike or jockeying for position at the end of the run. Low intensity workouts aren't as physically demanding, so they allow an athlete to train for longer periods of time, thus generating greater overall aerobic fitness. An ideal triathlon workout program contains both types of training, with the majority being low-intensity.

Signing up for a triathlon is a big commitment, so you want to be sure not to overdo it as you train. Read on for more specific guidance on exactly how intensely -- or moderately -- you should train.