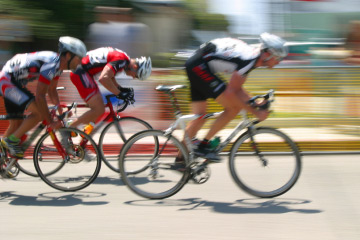 You're more likely to push yourself toward improvement if you bike with a group.
©iStockphoto.com/P_Wei

It's the Holy Grail of endurance sports: Running 3,000 miles through forests, deserts and mountain ranges, the notorious Race Across America is a non-stop cycling race across the continental United States. Riders eat on the go, and they take catnaps of no more than a couple of hours. Per day, they'll burn an many as 18,000 calories -- as much as an 11-foot stack of Big Macs [source: Mirkin]. After several days without sleep, riders will begin to see vivid hallucinations. In the inaugural race in 1982, one cyclist hallucinated that roadside trees were attempting to kill him. The 2004 winner spent much of the race convinced that he was being pursued by horsemen [source: Cycling for Fitness]. Amazingly, despite these near-impossible obstacles, winning riders will typically make from it from the Pacific to the Atlantic coast in less than 9 days.

Fortunately, not all group cycling is as intense as the Race Across America. Tamer versions of group cycling exist almost anywhere with a good road system. You've probably seen them -- packs of cyclists, also know as pelotons, coursing down the highway shoulder. They're astonishingly close together, they're dressed in tight-fitting regalia, and they're usually accompanied by choruses of ringing bells.

It may look like a human-powered circus, but group cycling comes with a slew of advantages over solo cycling. Surrounding yourself with a crowd of other cyclists is a great way to stir your competitive side. When cycling alone, it's easy to slow down or take the occasional shortcut. In a group of sweaty, focused riders, however, you'll find yourself pedaling a bit harder. Group cycling is also a bit easier than solo cycling. In a peloton, you can also take advantage a technique known as "drafting," where riders cut down on their wind resistance by sheltering behind a lead rider. By drafting, group riders can use significantly less energy than solo riders. Not to mention the social benefits of group cycling -- there's something to be said for the simple camaraderie of a ride, and if you're strapped for conversation starters, you can always just "talk bikes."

If your town has a post office, chances are it has a cycle group. Most bike shops, gyms or community centers should be able to let you know what's available -- but make sure to choose wisely. Cycle groups come in all sizes. For the beginning cyclist, think about cutting your teeth in an "all ages" ride. This will be more relaxed and relatively slow-paced. Plus, you'll be forgiven for minor transgressions, like wearing jeans or flip flops. If you think you're ready for something a bit more professional, you might be able to track down some riders training for an upcoming triathlon.

Keep reading to find out if an outstretched left arm is an obscene gesture.

Top 5 Ways to Save the Planet with Bicycle