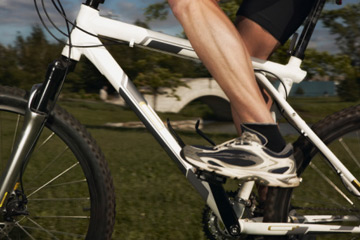 The rate at which you pedal affects your cycling performance in the long run.
Jupiterimages/Brand X Pictures/Thinkstock

Cyclists know more than anyone the importance of efficiency. Not only do everyday cyclists take pride in how biking can be more energy-efficient than driving a car, but avid cyclists improve personal efficiency in order to obtain optimal performance. They strive to make their bike an extension of their own body -- to translate every bit of energy their body exerts into power and speed.

In race training, working to strengthen your muscles is important, of course, but if you can simply work to improve your efficiency, you can boost your performance with the strength you already have. To improve cycling efficiency, you'll want to pay close attention to the concept of cadence.

Cadence is simply the speed at which you pedal. Cyclists measure this in revolutions per minute, or rpm. So, if one foot pedals a full circle about once every second, you are cycling at 60 rpm. It's a simple concept, but knowing about how it affects your performance will prove enormously helpful.

The average cyclist pedals at about 60 rpm, but advanced cyclists pedal at much higher cadences, from at least 80 rpm to more than 100 rpm.

Obviously, gears play a large role in cadence and how it translates into performance. It's easier to pedal on a low gear, but you'll have to sustain a very high cadence to move quickly. High gears, on the other hand, let you go faster on a lower cadence, but they require you to push harder to pedal.

To avoid fatigue and wasted energy, you need to find a good balance and shift gears as needed to maintain the most comfortable cadence. But as you improve your fitness, you'll be able to improve your overall performance at higher cadences. Cadence drills will also be important for improving endurance, which is especially helpful for triathletes. Next, we'll talk about the idea of optimal cadence, and then we'll cover some drills that will help you achieve it. 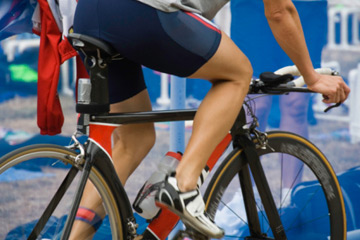 Cyclists look for the right cadence, one that works with their personal physiology.
iStockphoto/Thinkstock

Cyclists are sometimes identified as "mashers" or "spinners." A masher is someone who likes to race by pedaling hard on high gears with low or moderate cadences. A spinner, on the other hand, races on low gears with high cadences.

One might assume that there's one optimal cadence -- or an ideal cadence -- that perfectly balances power and endurance that every cyclist should strive for, allowing the human body to be its most efficient. Interestingly, some studies that examined cadence concluded that a lower cadence -- about 60 rpm -- is the most physiologically efficient, even though the best cyclists pedal at higher cadences -- usually over 80 rpm. However, more recently, some have decided to test this again, accounting for some flaws in the earlier studies. These follow-up studies found that, with a high power output, 80 to 100 rpm cadences can be the most efficient [source: Cheung].

According to one theory, the aerobic performance is best at these higher cadences. This could be a result of the body delivering more blood to and from the heart while pedaling at such a high rate. This means that blood will have higher oxygen levels, improving aerobic performance [source: Peveler].

So, some argue that this is because optimal cadence can be different depending on the individual. Lance Armstrong, for instance, achieves very high cadences on lower gears because of his high aerobic capacity [source: Ertl]. In his discussion of optimal cadence, Dr. Stephen Cheung likens it to walking -- the ideal walking cadence can depend on the individual's body size and simple preference [source: Cheung].

Although optimal cadence can depend on the person, cycling coaches generally encourage mashers to push themselves to a higher cadence on a lower gear. Next, we'll go over some helpful drills for just that purpose. 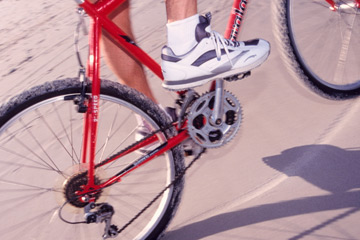 Your upstroke can be just as important as your downstroke.
Pixland/Thinkstock

Considering what we've learned about cadence, if you're interested in trying your first triathlon or just want to improve your performance, you might want to try cadence drills.

But before we dive into the drills, we should mention that, if you're serious about improving your cadence, the experts recommend getting a cadence meter. These devices can attach to your bike and will be an invaluable tool to help you easily monitor your cadence at a glance. More expensive gadgets will display cadence along with other factors, including speed or even heart rate.

The simplest drill merely involves practicing a specific portion of the course in a lower gear than what you would naturally choose. Increase your normal cadence only 5 rpm at a time [source: Dallam].

Several cycling experts recommend a particular high-cadence drill using the same basic steps, with only slight variations. Begin by cycling on a low gear at your normal cadence, and gradually increase your cadence until you start to "bounce" in the saddle. At this point, you can start to reduce your cadence slightly so that you no longer bounce. Sustain this cadence for 1 or 2 minutes before gradually slowing the cadence back down to your normal pace.

Some cycling training books discuss improving the mechanics of your pedaling method while focusing on cadence -- in particular, the upstroke. It may seem inconsequential, as the downstroke is really where you get your power, but experts say your upstroke is important to improving efficiency alongside cadence. It's good to pull back at the rise of an up-stroke, with a motion as if you were scraping mud off your shoes [source: Williamson]. Author Thomas Chapple argues, for instance, that just as cadence allows your muscles to contract and relax "in harmony," so does a good full pedal stroke in this scraping-mud method [source: Chapple].

Now that we understand the basics of cycling cadence and how it affects your performance, you should have a good idea of how to incorporate this in your training for the next triathlon.