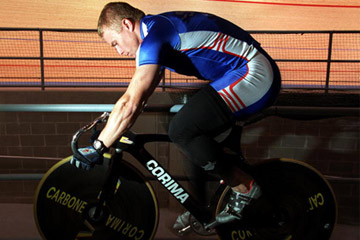 Bicycle rollers are like the nagging, micromanaging boss of cycling equipment: Do something slightly wrong, and you'll hear about it right away. Improper pedaling, a flailing upper body, poor steering -- the infraction doesn't really matter. You're going to fall off the rollers, and you might look silly doing it.

When rain starts to fall or snowdrifts pile up, avid recreational cyclists and medal-winning racers typically turn to rollers training as a way to keep their skills sharp indoors. Experts scratch their heads at pinpointing the year of their invention -- the consensus is that they've been around since at least the late 1800s -- but there is no confusion about their purpose. In contrast to the stationary trainers that you might see in a fitness gym, which are intended to build strength and power, bicycle rollers provide a skill-based workout devoted to form and to making cyclists pedal with greater economy of movement. Typically, cyclists incorporate both rollers and stationary training devices into their regimens. (In fact, many roller manufacturers produce accessory kits that can support a bike on rollers, essentially turning it into a stationary trainer.)

It's easy to think of bicycle rollers as treadmills for bicycles, but a single training session proves the clumsiness of both this analogy and your balance. Riding on rollers is a skill all its own, requiring sharp focus and greater sensitivity than a stationary trainer or a ride in the open air. The experience of pedaling on them for the first time humbles even the most accomplished road racer. Nevertheless, with a little time, dedication and practice, bicycle rollers help develop the stability and pedaling efficiency required to reach the front of the pack.

Click ahead to learn about the simple design -- and the many variations -- of bicycle roller construction. 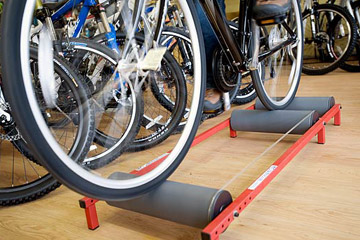 Cyclists from all over the U.S. use these McClain Training Rollers to train indoors, increase endurance and improve cardiovascular fitness.
Trumpie Photography

Bicycle rollers follow the same general design: three cylindrical drums housed on axles inside a rectangular frame. Two drums support the back wheel, and a third supports the front wheel; the front and back drums connect with a rubber belt.

Roller frames are typically made of steel or aluminum. The belt is made of rubber, and the drums are made of PVC or aluminum. PVC materials are less durable and require periodic replacement depending on the number of miles logged on the trainer, but bicycle rollers are largely maintenance free. Depending on the manufacturer and materials used, a set of rollers costs between $250 and $400; modest models cost as little $170, and high-end versions can retail at more than $1,000. Most models weigh between 20 and 30 pounds (about 9 to 14 kilograms).

Tim Fry, president of Mountain Racing Products, which now owns Kreitler Rollers, says that the standard width of a roller drum is approximately 15 inches (38.1 centimeters). Manufacturers offer narrower drums for travel-friendly models or for cyclists looking to challenge themselves by pedaling on a reduced area [source: Fry]. (Some riders simply mark off a reduced area on standard rollers with masking tape.) While most drums are straight all the way across, some manufacturers produce rollers with a concave, hourglass shape to automatically steer the cyclist toward the center and make driving off the rollers less likely. A new variation is the E-motion Roller manufactured by Inside Ride, Inc. It boasts a floating frame that moves underneath the tires, sliding back and forth as the cyclist moves his or her body.

Next, get back in the saddle and read on to learn the basics of pedaling on rollers.

While some prodigies of rollerdom can ride without using the handlebars or even remove their jackets over their heads without missing a pedal stroke, the task requires just one thing from neophytes: Pedal without falling over. Because there is no momentum in pedaling on rollers and riders have only the width of the drum to correct any imbalance before falling, this easy adage can be difficult in reality.

Before climbing on to the roller, the rider should secure the front axle just ahead of the front bicycle wheel to prevent it from driving off the roller. Except for very tall riders, most cyclists use a milk crate, a chair or some sort of makeshift step to climb onto the saddle. Many beginners place their bicycles inside a doorframe so they can reach out and support themselves as they mount and dismount their vehicle. A doorframe is also a way for cyclists to brace themselves if they lose their balance -- a very real hazard since nearly all cyclists ride on rollers with bikes that require clipping into the pedals. If a doorframe is unavailable, riding next to a wall and trying to fall only to that side is a suitable alternative. Regardless, pedaling on rollers next to a large glass coffee table is just an all-around bad idea.

Non-roller riders have a persistent fear that if they pedal off the rollers, a head-on collision with the nearest wall is in their immediate future. In reality, all of the energy a cyclist produces remains in the drums -- if the bike comes off the device, the wheels come to a halt. "The only way you can be propelled forward is if you keep pedaling, which I've never seen anyone do," Fry says. [source: Fry]

Even great road cyclists have a hard time on rollers. Turn the page to find out why.

That balance is key to riding a bicycle is no surprise. But what happens without great balance? Nothing at first. It's only after pedaling for a while that one knee may begin to hurt, or one Achilles tendon will start to ache. The reason for this unbalanced pain is that everyone has a dominant side, and even trained cyclists often have one leg that is stronger than the other. Without proper balance training, one leg will continue to get stronger as the other weakens, which leads to injury, falls and a slower speed [source: Crawford].

Besides providing a way for cyclists to train indoors, rollers remove the variables of street training, and having a controlled environment is preferable for certain training protocols. If an itinerary calls for alternating two-minute bursts of pedaling as fast as possible with one-minute periods of slower riding to recover, rollers ensure a rider doesn't hit a stop sign during the sprints or a steep hill during the recovery.

While interval training can be a great workout, the primary benefit of roller training is developing correct pedaling technique. Proper pedaling involves driving down with one foot while using the opposite foot to pull up and back slightly. This technique generates constant power throughout each pedal stroke. By contrast, many cyclists do what's called pedaling in squares, an improper style where each foot drives the pedal from roughly 2 o'clock to 8 o'clock, rests on the pedal and ceases generating power until returning to the 2 o'clock position. The effect is an inefficient pulse of force followed by recovery.

Clean technique also leads to upper-body stability. Cyclists who pedal in squares tend to bounce off the saddle as they push through each stroke. "Rollers don't like you to be bouncy," says Ken McLean, technical director for Landry's Bicycles in Massachusetts [source: McLean].

Even successful, strong road cyclists struggle when beginning bicycle roller training plans -- in many cases, their strength may have compensated for poor pedaling technique. But, with practice and a lot of negative reinforcement, rollers teach the rider to stop flailing and pedal efficiently.

Newer riders should pedal slowly until they've mastered steering on the comparatively narrow width of the rollers. Pedaling in a straight line boosts pedaling efficiency and ultimately translates into improved finishing times during race season. McLean says that several cyclists have told him that after an offseason spent on rollers, they can pedal for miles along the painted lines on the road [source: McLean].

Read on to learn about early 20th century bicycle roller races and their modern-day counterpart, the Goldsprint.

Beyond pedaling your bike, there isn't much else you can do on rollers -- unless you want to make a smoothie. Al Kreitler, the late founder of Kreitler Rollers, hooked his rollers up to a blender by designing a drive system. "I'm not aware of too much else, but the blender was a good idea," Fry says [source: Fry]. 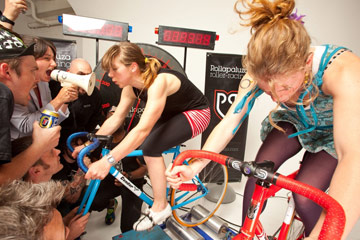 Rollapaluza manufactured rigs are unique in that they are mechanical and digital, retaining the old-school feel of traditional roller-racing whilst incorporating hundredth-of-a-second digital timing.
Rollapaluza

As long as bicycle rollers have existed, so has roller racing. In the early 20th century, audiences both in the United States and abroad would gather to watch contestants compete against one another on stage in timed competitions. In the 1950s, Eddie Wingrave, a British citizen and perhaps the only professional roller racer of the day, toured with a big band and challenged audiences to best him.

The bike courier community has revived this phenomenon in recent years with the advent of Goldsprints. In these loosely organized events -- there are no sanctioning bodies and the races often occur in bars -- people race against one another on rollers connected to a computer, often in front of other beer-swilling cyclists. Using open-source software and DIY hardware set-ups, the computer counts the revolutions until a racer has reached a prescribed distance measured by the computer. The pool of competitors lessens through several rounds of play.

Instead of standard roller set-up, many of the bikes used in Goldsprint events have no front wheel. Instead, the racers replace the wheel with a fork stand, allowing the rear wheel to glide over the rollers and letting the racer focus on maximum effort over technique. Competitors also use fixed-gear bikes so they can pedal as quickly as possible without shifting. "It's really a cadence race," McLean says. "Whoever spins the pedals fastest wins" [source: McLean].

So, rollers can be either a way to hone technique or a way to throw technique out the window and bank on speed. They can be tools to improve race performance, or they can be vehicles for the race itself. They can look as spare as their earliest incarnations or as gadget-adorned as the 21st century allows. Bicycle rollers are comprised of three drums, a rubber belt, a frame and a whole lot of contradictions.

Read on for lots more information about bicycle rollers.