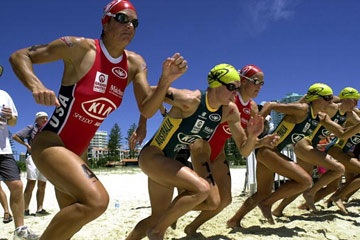 As the sport of triathlon grows, so does the innovation within the sport.
Darren England/Getty Images

The beautiful thing about non-traditional triathlons is that race organizers are free to design innovative swim/bike/run combinations that best suit their community. In a Formula One triathlon, the race is divided up into multiple legs -- as many as six or eight -- in different swim/bike/run combinations. Formula One races are also called "super sprints" because they combine several short, fast legs instead of the longer endurance challenges of a traditional triathlon.

The Kure Beach Double Sprint, now in its 14th year, is a great example of a formula one-style triathlon. The Kure Beach is a "down-and-back" race between the ocean and the town hall of Kure Beach, N.C. Participants start with a 375-meter (0.2-mile) open-water swim, then get into their running gear for a 1.5-mile (0.9-kilometer) run, then hop on their bikes for a 10-kilometer (6.2-mile) bike ride to the town hall. It's called a "double sprint," because the racers turn right back around and run the course in reverse: biking, running and finishing with the same open-water swim.

Some race organizers have decided to completely turn tradition on its head and run a reverse triathlon. More on that in the next section.