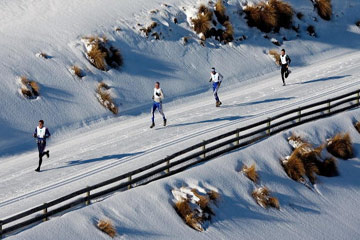 Winter triathletes trudge through the snow during the winter triathlon at the 2009 Winter Games NZ in Wanaka, New Zealand.
Hannah Johnston/Getty Images

A winter triathlon is a grueling endurance challenge consisting of running on snow-packed trails, mountain-biking down ski trails and cross-country skiing. Winter triathlons have been sanctioned by the International Triathlon Union (ITU) since 1997 and more and more American races are being held in the Rocky Mountain region every year [source: USA Triathlon].

Winter triathlons require more specialized equipment than a traditional triathlon. For starters, it's difficult to run in the snow with normal running shoes, so many winter triathlon racers wear cross-country cleats or customize their shoes with one-eighth-inch (3.2-millimeter) metal spikes. Mountain biking on snow is a whole different animal, requiring special tires that are slightly deflated in order to give more traction. Cross-country skiing not only requires specialized equipment, but significant training in what many believe is the most physically demanding sport in the world.

The lengths of existing winter triathlon courses vary greatly, but the standard distances are 5 to 9 kilometers (3.1 to 5.6 miles) for the running portion, 10 to 15 kilometers (6.2 to 9.3 miles) for the bike ride, followed by a 8 to12-kilometer (6.2 to 7.5-mile) cross-country ski. A recent addition to competitive winter triathlons is a relay race in which teams of three participants each run shorter courses. The race usually involves a 2-kilometer (1.24-mile) run, a 5-kilometer (3.1-mile) bike and a 3-km (1.9-mile) ski. The ITU holds international championship races every year and is lobbying hard to get the winter triathlon included in upcoming winter Olympic games [source: USA Triathlon].