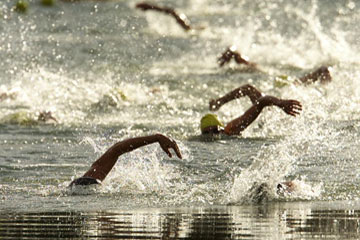 Strong swimmers complain that they get shortchanged by the traditional triathlon format, in which the swimming leg is by far the shortest. In an aquathlon, the cycling portion of the triathlon is tossed out in favor of a run/swim/run combo or simply two swims followed by a run.

Aquathlons are also attractive to race organizers, who don't have to worry about securing road space for the cycling leg of a triathlon, which is traditionally the longest. Since aquathlons are limited to running and swimming, the event can be contained in a relatively small location like a lake and nearby woodland trail [source: USA Triathlon].

One of the more famous aquathlons is the Alcatraz Challenge Aquathlon in California's San Francisco Bay. The original Alcatraz Challenge, first run in 1983, was a triathlon based on the Ironman in Hawaii. Racers would swim from the infamous Alcatraz rock to the shore, bike across the Golden Gate Bridge, then run the 7-mile (11.2-kilometer) Dipsea trail twice [source: Alcatraz Challenge]. The current race format has been shortened to an aquathlon, in which racers brave the cold, choppy waters (with or without wetsuits), then run across the Golden Gate to the finish.

If you like swimming and cycling, but your knees can't take the running, then get ready for the aquabike, which we'll talk about on the next page.