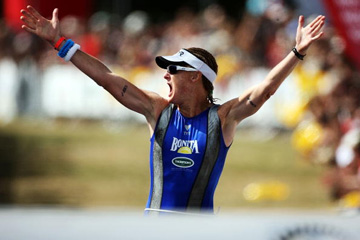 Triathlon is one of the fastest growing athletic events in the world. According to the International Triathlon Union (ITU), the sanctioning body for competitive triathlons worldwide, triathlon participation grew 300 percent in the past five years [source: ITU]. Membership in USA Triathlon, the American racing body, jumped 20 percent between 2008 and 2009 alone [source: USA Triathlon].

The exploding popularity of the sport -- which is attributed to a growing health-consciousness among adults in the United States and the visibility of triathlon starting with the 2000 Olympic Games in Sydney -- has led to innovative new course designs, distances and disciplines [source: USA Triathlon]. Fans of outdoor sports like mountain biking and cross-country skiing have thrown their hats into the ring. Some people even run the race in reverse.

The variety and creativity of non-traditional triathlons is proof that triathlon is a living, breathing, expanding sport with a bright future. On the following pages, we'll talk about some of the most popular twists on the traditional triathlon, starting with the duathlon.