History of the ITU 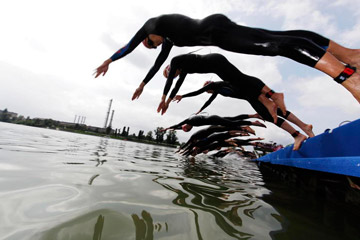 As you might expect, the history of the International Triathlon Union is rooted in the history of the triathlon itself. The first triathlon took place in San Diego, Calif., on September 24, 1975, and was organized by the San Diego Track & Field Club. The race included a 5.3-mile (9-kilometer) run, a 5-mile (8-kilometer) cycle and a 600-yard (.5-kilometer) swim in Mission Bay. Forty-six athletes finished the race.

Enthusiasm quickly spread for the event that combined three races into one. In only a few years, the sport of triathlon became one of the fastest growing sports in the world. Its rapid growth drew the attention of the International Olympic Committee (IOC) in 1988. Then IOC president Juan Antonio Samaranch arranged a meeting in Stockholm to discuss adding triathlon to the Olympic Games. Canadian Les McDonald was selected to be president of a working committee for triathlon, and Sweden's Sture Jonasson was elected as secretary.

The International Triathlon Union was founded on April 1, 1989, at the first ITU Congress in Avignon, France. Thirty National Federations attended the first Congress, and the sport's first World Championships were held in Avignon in August 1989. Here, Olympic distances were set at a 1.5-kilometer (.93-mile) swim, 40-kilometer (24.8-mile) bike ride and 10-kilometer (6.2-mile) run. More than 800 athletes representing 40 countries competed in the first World Championships. McDonald was elected as ITU's first official president in 1989.

The IOC finally added triathlon to the Olympic program at its Congress in Paris in 1994. The event made its debut at the 2000 Games in Sydney, where Switzerland's Bridgitte McMahon and Canada's Simon Whitefield earned the sport's first gold medals.

In November 2005, Spain's Marisol Casado was elected as the ITU's second president, and she became a member of the IOC in February 2010, at the IOC's annual meeting in the ITU's hometown of Vancouver.

To learn more about the variety of events the ITU offers, click to the next page.