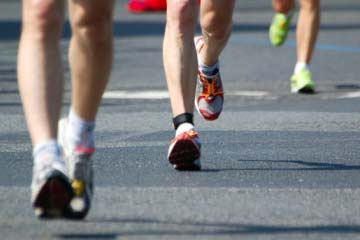 A proper -- and practiced -- diet is crucial for success in a triathlon.
iStockphoto/Thinkstock

Keeping energy levels high enough to swim, cycle and run through a triathlon is a fundamental challenge facing every triathlete who chooses long-form races. There are a few options for maintaining the necessary hydration and carb concentrations during an intense event like a triathlon: Apart from consuming water, racers can also drink fluids like sports drinks and eat foods like bananas, jelly beans and energy bars and gels.

Different triathletes prefer different combinations of race-day fuel, and there are several reasons for that. An all-liquid race-day regime can lead to flavor fatigue -- competitors get so sick of the taste of their stock of sports drinks, say, that they avoid drinking them. Too much water in relation to carbohydrates, on the other hand, can make a person hyponatremic (have too few electrolytes) which is also bad. For athletes who stick to the solid stuff, there's the potential issue of food-related gastrointestinal symptoms, which while usually no more than temporary complaints, can still present a serious blow in terms of top performance. It's a delicate balance to strike!

But first let's start pre-race: After carb-loading during the couple of days leading up to the competition, both in food and beverage form, our triathletes are almost ready. The morning of the triathlon, they'll want to wake up with plenty of time to eat a solid breakfast about 3 hours out. This meal needs to be balanced, but carb-heavy -- 2.5 to 3.5 ounces (75 to 100 grams) of complex carbohydrates is a good amount to aim for.

Now that our athletes have a firm base of energy-rich carbs coasting through their digestive systems, it's time to focus on how much they'll consume during the triathlon itself. Simply gulping water can get athletes through shorter and lower-endurance competitions, but long-form triathlons like Olympic distance, half-Irons or Iron distance are serious contests, and athletes need to bolster their carb count with some combination of snacks and sports drinks throughout.

The general rule of thumb is to consume between 1 and 2 ounces (30 and 60 grams) of carbohydrates every hour of the competition. That comes out to roughly one sports drink each hour -- plus any water a triathlete senses he or she needs. On top of that, there's the option of food. Two-to-three medium-sized bananas, a couple of energy bars or gels, a couple of chocolate bars or a jam sandwich are among the many options triathletes can choose from. (However, many multi-sport athletes choose to avoid solid foods since it takes lots of energy to digest them.) The goal, though, is to get plenty of beverages and foods that rank high on the glycemic index, so the simple sugars they hold are released quickly into the bloodstream of the triathlete.

Some competitors may want to load up on solid carbs during the biking phase of the triathlon since the jostling during the running stage can make eating troublesome. But other triathletes won't be bothered by this as much and may want to save a few snacks for the final leg. The most important thing is to work out well in advance what works, and stick closely to that regime during the triathlon. It helps avoid nasty, last-minute surprises -- any serious competitor's worst nightmare.