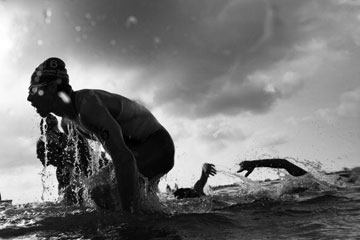 Alois Knabl of Austria emerges from the swim leg during the Youth Men's Triathlon on day two of the Youth Olympics.
Adam Pretty/Getty Images

Training for and competing in a triathlon is the ultimate way to reach excellent physical condition, and to challenge yourself to become a better all-around athlete and competitor. In a triathlon, participants compete in three back-to-back endurance events: swimming, biking and running. Athletes compete to complete each of the three parts with the best overall time.

Although it's a tremendously popular sporting event today, the triathlon is a relatively new concept, and the first triathlons only had a handful of participants. Today, a quarter of a million people in the United States compete in triathlons each year [source: U.S. Triathlon].

Since the triathlon's birth in the 1970s, the popularity of the sport has grown exponentially. In August 1989, only 700 triathletes from 40 national teams competed in the world triathlon championships in France. In contrast, in 2006, USA Triathlon had 75,000 members; and in 2007, membership grew to 100,000 triathletes. In the United States, between 200,000 and 250,000 athletes compete in triathlons each year [source: U.S. Triathlon]. Today, the fastest women complete the race in about nine hours, while the fastest men finish in a little more than eight hours [source: Beginner Triathlete].

A 1.5K (0.9-mile) swim, 40K (24.8 miles) bike ride and 10K (6.2-mile) run is the international standard for triathlons, and this standard is used at world championships and at the Olympics. But other variations of the triathlon have been developed during the sport's relatively short history. For example, in the 1980s, the short distance triathlon was invented, which is half the distance of the international triathlon standard.

Those who want to participate in a triathlon can choose from many events. But the world's die-hard triathletes typically have their eyes set on the Ironman, which is one of the most exclusive triathlon competitions.

Before we dig into the Ironman, we'll delve into the triathlon's beginnings on the next page.

Today we think of triathlons as popular competitions, but the sport is actually a relatively new phenomenon in the world of athletics. Its roots can be traced back to 1920s France, when competitors raced, biked and swam around the greater Paris region of Joinville-le-Pont, Melun and Poissy. Although these earliest triathlons took place in Europe, it wasn't until about 50 years later in the United States that the triathlon really took off.

Unlike the intense competitions of today, early triathlons actually began as training sessions for runners, cyclists and swimmers. In 1974 in San Diego, Calif.'s Mission Bay area, a group of runners, swimmers and cyclists who trained together at the San Diego Track Club put together some informal races to build up their endurance for their respective sports. These first triathlons were held on summer evenings and gave participants a break from their grueling training schedules.

Led by Jack Johnstone and Don Shanahan, this group of athletes and friends hosted 46 participants in the first official triathlon, the Mission Bay Triathlon, on Sept. 25, 1974. In addition to Johnstone and Shanahan, John Collins, a U.S. Naval Officer, also played a pivotal role in the development of the sport. He took the triathlon to Hawaii, where he worked to bring together the major swimming, biking and running events in Oahu into one huge triathlon event: the Ironman.

How did the Ironman begin and what makes it one of the most intense competitions in the world?

Once the triathlon was introduced to the sports scene, it didn't take long for it to take off as an important endurance competition. The Ironman, in particular, pushes its participants to the limits and is the ultimate test of endurance of both the mind and the body.

In 1978, Collins helped to form the Hawaii Ironman Triathlon which combined the Waikiki Rough Water Swim (2.4 miles/3.8 kilometers), the Oahu Bike Race (112 miles/180.2 kilometers) and the Honolulu Marathon (26.2 miles/42 kilometers) into one event. Out of the 15 athletes who participated in the first event, 12 finished the race. The first Ironman, Gordon Haller, finished in 11 hours, 46 minutes and 58 seconds [source: Ironman History].

In 1979, one woman and 13 men completed the competition. The first female Ironwoman Lyn Lemaire finished fifth [source: Ironman History]. The next year, thanks to a Sports Illustrated article about the race, hundreds of people entered the competition. By 1982, 580 athletes competed, and the event was covered by media outlets like ABC World Wide Sports. Currently, 1,800 athletes compete in this race [source: Ironman].

For more information on running and other sports, visit the links on the next page.

Although triathlons surged in popularity through the 1980s and 1990s, the sport didn't become an Olympic event until the 2000 Olympics in Sydney, Australia. Bridgette McMahon of Switzerland and Simon Whitfield of Canada won the women's and men's races, respectively. The first American to win a medal in an Olympic triathlon was Susan Williams of Colorado, who won the bronze in 2004 in Athens, Greece.