Bikes, running shoes, swim caps and racing clothes all have to be disposed of when you are done using them. Every year, tons of gear wind up in landfills. Here's an example to highlight the problem: Many experts recommend that running shoes be replaced after 300 to 500 miles (483 to 800 kilometers) [source: Runner's World]. When you pull a brand new pair out of the box, it's likely your old ones are headed for the garbage dump. If you run an average of 1,500 miles (2,400 kilometers) a year, that's at least three new pairs a year. If you run for 20 years and throw out each used pair, you'll toss 60 pairs of running shoes into the garbage. Now compound that figure by the millions of runners around the world throwing out three or more pairs a year. That's quite a few shoes going into a landfill.

In recent years, gear for the environmentally conscious has been introduced into the market. For example, there's now a biodegradable running shoe by Brooks. Rather than using ethylene vinyl acetate, which can take up to 1,000 years to decompose, the sole is made using BioMoGo, a material expected to biodegrade over the course of 20 years. The potential result could save 30 million pounds of waste. Brooks is open-sourcing this technology, increasing the likelihood that fewer running shoes will end up in landfills [source: Lebovits].

Being aware of the racing clothes you wear is another important step in sustainable gear. Many manufacturers use organic dyes (such as mineral dyes) or recycled fabrics. Looking to recycle your worn-out swim caps? EcoAthlete, a group in Seattle, Wash., is happy to take them and turn them into flip-flops.

Racing-bike technology has changed considerably over the years. However, the process of bike manufacturing takes its toll on the environment. Frames made from alloys have replaced heavier aluminum frames, making for a lighter bike. The problem is that alloys are mined, and the waste generated by this process huge. A burgeoning trend is racing bikes made partially from bamboo. Growing bamboo is a more sustainable practice than using metals that require intense manufacturing. These bikes are garnering positive reviews. [source: Charleton].

Other ways to reduce the impact of your bike include:

Next up: environmentally friendly ways to train for your triathlon. 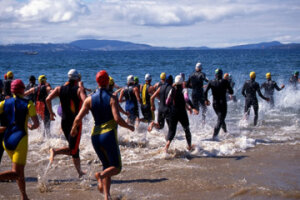 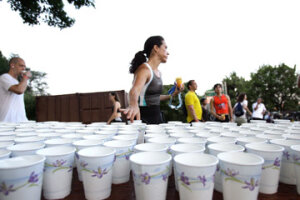 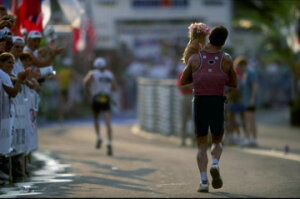