Browse the article How to Be a Green Triathlete 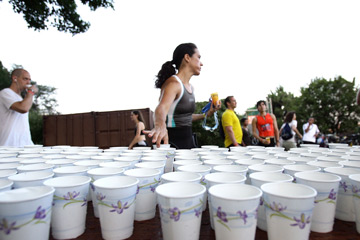 Empty water cups are just some of the waste organizers of "green" triathlons are trying to reduce.
Dario Cantatore/Getty Images

You're just coming up on mile 10. You've had an amazing race so far. The weather is cool but not cold; the sun is shining but not so brightly it hurts your eyes. The size of the field is perfect -- large enough to feel competitive but not an overwhelming mass of legs and arms. You swam like a champ and were able to get out of the water and onto your bike in one smooth motion. So far, your running has been strong, and you feel great. As you come up to the water station, all the runners begin to jockey for position -- the closer you can get yourself to the outside of the pack, the faster you'll clear the water station. This is key for two reasons: you'll stay on pace and, perhaps most importantly, you won't slip and fall on one of the hundreds of paper cups that were thrown on the ground by the athletes who've passed.

But those discarded cups are hardly the only waste at many triathlons. The amount of garbage left behind at today's races was unheard of in 1974 when the Mission Bay Triathlon first put the multi-sport event on the public's radar [source: Johnstone]. With a field of just 46 people and a small crowd of spectators, the amount of resources needed to create the race was minimal. Since then, the popularity of triathlons has grown at a quick pace. What started as a small West Coast event has turned into a world-wide sport with hundreds of races each year and thousands of participants [source: USA Triathlon].

The next sections will explore how race organizers are "greening" their triathlons and what you can do to lesson your impact while participating in one of the most exciting tests of endurance and athleticism out there.

A traditional triathlon consists of three separate events -- swimming, biking and running -- rolled into one race. The rise in the popularity of triathlons brings with it a rise in the amount of waste generated at each event. From paper cups left on the roads to race T-shirts made in factories overseas, triathlons have more of an impact of the environment that you might think.

In addition to pre-race bags filled with plastic and paper promotional materials, other waste includes plastic bottles and food packages strewn along the course, as well as fossil fuels consumed by boats, staging cars, motorcycles and buses for transporting athletes.

This problem hasn't slipped by race organizers and triathletes unnoticed. The awareness of the impact one race has on its immediate environment -- and the waste stream as a whole -- is changing the culture of consumption in triathlons. In 2007, the Council for Responsible Sport was founded by the Directors of the Freshwater Trust Portland Triathlon with the goal of helping race organizers green their events in the categories of waste, climate, equipment and materials, community outreach, health promotion and innovation.

Each category is organized on a point system -- the more green points a triathlon earns, the higher it is ranked as a sustainable sporting event. In order to be certified as "green" by the Council for Responsible Sport, triathlons must satisfy a list of criteria including:

In 2007, three triathlons in Boulder, Colo., sponsored by Tri Sustainability made huge inroads into building greener races. With a mission of "zero waste, carbon neutral and local," the triathlon organizers worked with local groups to offset the impact of the events on the surrounding environment. The results speak for themselves. Tri Sustainability recycled 3,350 gallons of commingled containers (plastic, paper and metal), more than 4,000 pounds of cardboard (which spared 38 trees) and collected 19,649 pounds of compostable material [source: Turner]. Tri Sustainability plans to increase greening efforts while continuing to refine its approach to creating environmentally friendly triathlons.

Athletes train long and hard to perform to the best of their abilities. Planners of "green" triathlons are now doing the same, setting goals to minimize their impact while promoting environmental awareness. In the next section, we'll learn about the latest trends in athletic gear.

A Sampling of Green Triathlons in the United States

Bikes, running shoes, swim caps and racing clothes all have to be disposed of when you are done using them. Every year, tons of gear wind up in landfills. Here's an example to highlight the problem: Many experts recommend that running shoes be replaced after 300 to 500 miles (483 to 800 kilometers) [source: Runner's World]. When you pull a brand new pair out of the box, it's likely your old ones are headed for the garbage dump. If you run an average of 1,500 miles (2,400 kilometers) a year, that's at least three new pairs a year. If you run for 20 years and throw out each used pair, you'll toss 60 pairs of running shoes into the garbage. Now compound that figure by the millions of runners around the world throwing out three or more pairs a year. That's quite a few shoes going into a landfill.

In recent years, gear for the environmentally conscious has been introduced into the market. For example, there's now a biodegradable running shoe by Brooks. Rather than using ethylene vinyl acetate, which can take up to 1,000 years to decompose, the sole is made using BioMoGo, a material expected to biodegrade over the course of 20 years. The potential result could save 30 million pounds of waste. Brooks is open-sourcing this technology, increasing the likelihood that fewer running shoes will end up in landfills [source: Lebovits].

Being aware of the racing clothes you wear is another important step in sustainable gear. Many manufacturers use organic dyes (such as mineral dyes) or recycled fabrics. Looking to recycle your worn-out swim caps? EcoAthlete, a group in Seattle, Wash., is happy to take them and turn them into flip-flops.

Racing-bike technology has changed considerably over the years. However, the process of bike manufacturing takes its toll on the environment. Frames made from alloys have replaced heavier aluminum frames, making for a lighter bike. The problem is that alloys are mined, and the waste generated by this process huge. A burgeoning trend is racing bikes made partially from bamboo. Growing bamboo is a more sustainable practice than using metals that require intense manufacturing. These bikes are garnering positive reviews. [source: Charleton].

Other ways to reduce the impact of your bike include:

Next up: environmentally friendly ways to train for your triathlon.

One of the most important components of training is food. What you eat plays a large role in your performance. It also is a huge factor on the health of our planet. Food production in the United States consumes an incredible amount of natural resources. In addition, trucking food long distances requires the use of fossil fuels and contributes to carbon emissions [source: Sierra Club].

Eating locally grown foods is an excellent way to help offset the environmental impact of large-scale farming. However, most athletes depend on "sports foods" to get them through training and racing. Cut down on packaging -- and save money -- by making your own power foods. Ingredients like rolled oats, peanut butter and nuts for sports bars can be found at the grocery store. According to a recent study sponsored by The University of Memphis Exercise and Sports Nutrition Laboratory, honey is "nature's sports gel." It is easy to digest and provides a quick boost of carbohydrates during a race. It also helps your post-training or race recovery by promoting muscle recuperation and glycogen restoration [source: Kraider, et al.]. You can buy honey locally from beekeepers or at farmers markets. For more information on local honey retailers check Bee Culture, a national organization for beekeepers.

Instead of using disposable water bottles, carry one that can be reused. Look for bottles made without BPA (bisphenol A), a plasticizer some scientists contend is linked to health problems [source: Buscher & Shelby]. Stainless steel bottles are another option for your water or sports drink.

If you have safe running or cycling routes that can get you to and from work, ditching the car is a great way to log some miles. As a form of transportation, bikes emit zero carbon emissions, reducing your overall carbon footprint. The same goes for running. A bonus to cycling and running to and from your job is that it helps you fit your workouts into a busy schedule.

With a little planning, triathletes in training can take care of their bodies and the planet.

Some staggering statistics from the United States