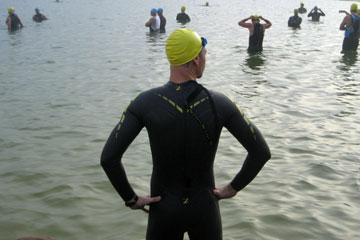 Garth Langan participates in the Atomic Man Half-Iron Man in Knoxville, Tenn. His wetsuit might be illegal in other triathlons.
Photo courtesy Alia Hoyt

In very recent years, triathlons have exploded in popularity around the globe, bringing out the competitive athlete in people of all ages. This spike in involvement has resulted in a few revisions to the original equipment guidelines, but it's like your mom always told you: The rules are for your own good.

Before we get into the nitty-gritty of what's not allowed and why, it's important to note that there are multiple triathlon organizations out there, and they don't always follow the same rules. Don't purchase any type of triathlon gear until you download or pick up a copy of the rules and regulations that correspond with the event you're competing in. You'll want to see what restrictions are enforced before getting gear for swimming, biking or running.

Any high-endurance sport comes with certain risks. Some rules are designed to minimize the risk of preventable injury. For example, failure to don a bike helmet is a great way to get kicked out of a triathlon. By the same token, headphones, iPods and other devices that can impair your hearing during competition are strictly forbidden. During a triathlon, your senses need to be performing at peak levels to negotiate the crowds of other competitors, so it's just plain dangerous to compromise your hearing in any way.

Wetsuit use is often regulated to ensure that triathletes perform both safely and fairly. USA Triathlon (USAT) prohibits wetsuit use if the water temperature is more than 84 degrees Fahrenheit (28.9 degrees Celsius), simply because that added layer of insulation can cause an athlete to become dangerously overheated, even while submerged in water.

"Athletes want to wear wetsuits because [they] help them float in the water better, but it's a health and safety issue," says Linda Cleveland, coach development manager for USAT.

Wetsuits are also sanctioned to prevent an unfair competitive edge. USAT recently followed the lead of the International Triathlon Union (ITU) by announcing that wetsuits thicker than 5 millimeters will be banned for use in competition beginning in 2013. Recent strides in wetsuit technology have turned out some models that increase buoyancy and lessen the amount of physical exertion required to stay afloat. In short, you can swim a whole lot faster in one of these bad boys than an athlete wearing last year's model. If you've already bought one of these new-fangled wetsuits, we sure hope you kept the receipt: Chances are good you won't be allowed to wear it anywhere other than your backyard pool. It's also wise to lighten your load and leave the artificial propulsion devices (flotation devices, flippers, fans and paddles) at home since they're also banned for competitive edge purposes in most events.

How Pilates for Triathletes Works
What is the history of triathlons?
How is mashing different from spinning?