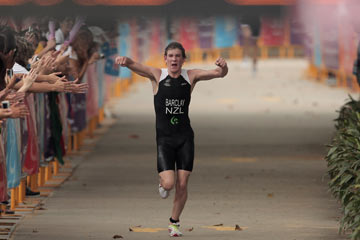 Whether you're a seasoned triathlete or just starting out, it's only natural to wonder how long it takes to finish a course. So, what's the average triathlon time? The short answer, unfortunately, is there's not one. Turns out, median triathlon times are hard to pin down: They vary among genders, age groups and terrain. For example, an ocean course in which swimmers battle waves and currents will take longer than one through a calm-watered bay [source: Shaw]. The same is true of running to the finish line on steep or mild grades. Even the weather can extend or reduce competition time.

However, understanding the range of times for your gender and age group can help you gauge your own personal progress. Consider checking out competitors' scores from previous events; most race organizers post results online, and the times often are sorted by age and gender. The majority of competitors finishing the Ironman triathlon, for example, cross the finish line between the 11- and 15-hour mark, and the same holds true for most races of similar distances [source: TRI-DRS]. Gender differences cause a variation, but not a considerable gap in finish times until competitors reach the 55 and older age group [source: Lepers].

There are dozens of devices to help you train by monitoring your performance, ranging from the simple (a wristwatch with built-in pedometer) to the complex. The Garmin GPS device, for example, measures a bevy of triathlon-training data, including speed, cadence, heart rate and race time. While such gear can be helpful during training, it does have a downside. Those who rely on the gear don't tend to pay attention to physical cues. It's like relying on a monitor to alert you to your next contraction during natural childbirth. Without the visual data, you'd surely recognize the cues, but instead your mind zeroes in on machine-generated data. This isn't necessarily a bad thing, but you run the risk of technology failing mid-way through a race. Paying attention to your perceived rate of exertion, for example, can help you know when to speed or slow your pace -- just by gauging how your body feels at its current level of activity [source: Norton].

To improve your time, whether by land or sea, focus not only on your overall health and nutrition, but the skill-set you use for each leg of the triathlon. For example, perfecting your stroke can cut swim times [source: Greenfield]. Something as seemingly inconsequential as head position can add minutes to your time; by disciplining yourself to gaze straight down into the water's depths during training (at least while swimming freestyle), you may gain seconds or minutes that give you an edge in the long run. Practice transitions from one sport to another, too. You don't want any surprises as you transition from swimming to biking -- or biking to running -- because they could easily add several minutes to your finish time.

Although it's difficult to pinpoint this sport's averages across the board, in the end, one average does hold true: The triathlon is an individual sport that prompts competitors to uncover their own personal motivators. Whatever your time, it's a good one.