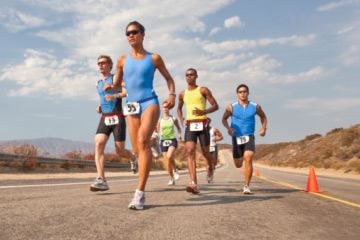 Is there any risk in running a triathlon?
Ty Allison/Photographer's Choice/Getty Images

If you read the headlines, a triathlon might seem like a death sentence. Titles like "Warning Over Triathlon Death Rate," "Recent Triathlon Deaths Have Experts Looking for Answers" and "Sudden Death Risk Looms in Triathlons" might catch your eye, especially if you just unwittingly signed up for the big race [sources: Laurence, Aschwanden, Warner]. Are triathlons really as dangerous as they sound?

The triathlon challenges athletes to swim, bike and run, in that order, without stopping. It's rising in popularity, with nearly two million participants a year [source: Triathlete]. Yet, between 2006 and 2008, 14 people died in the U.S. while competing, all but one during the swim portion. When compared to the number of participants, this death rate is almost twice that of marathoners [source: Warner].

This endurance race can test any athlete. An Olympic distance triathlon is a 1.5-kilometer swim, a 40-kilometer bike and a 10K run. While putting together the U.S. Triathlon series in 1983, triathletes Jim Curl and Carl Thomas established the race distances by stringing together standard accepted distances in each discipline.

The order of the disciplines came about for safety reasons. It might sound like a good idea to end with a cooling swim, but by the end of the race, you're more in danger of overheating. During a run, if you overheat, you can cramp up and fall over on the ground. Cramp up during a swim, and you can drown. The swim leg also spreads out racers for the bike leg. Because the swim leg is not many athletes' strong suit, having it first helps separate racers, lowering the risk of collision.

Like all sports, triathlon still has its dangers. During the open water swim, swimmers risk injury from being kicked by other racers or stung by sea creatures. Drowning is also an inherent risk. In the cycling leg, bikes can get tangled up in each other, and crashes may be a risk. On the run, racers face the risk of dehydration and cramping.

With so many risk factors, training for a triathlon is extremely important, especially if you're not a strong swimmer. Triathletes with pre-existing medical conditions, especially heart problems, should check with their doctor before competing, because swimming can affect certain types of heart conditions that may cause fatal arrhythmia.

Triathlon race directors do have ways of dealing with medical issues during a race. Read on to learn more about triathlon medical staffing. 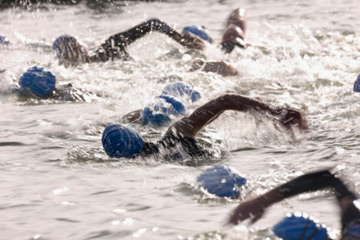 What are average triathlon times?
How Non-Standard Triathlon Events Work
How Triathlon Training in the Heat Works