Browse the article How Snowmobiles Work 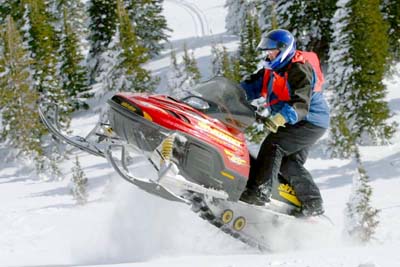 If you've ever ridden a snowmobile, you know that it's a fun, fast-paced way to sightsee and go places that cars can't. See more pictures of extreme sports.
Photo courtesy Sweet Light Photography

Like the GPS receiver and the aerosol can, the snowmobile has ­its ­origins in military technology.

Over time, Bombardier refined his design. His first "Ski-Doo" sold in 1959 and Bombardier Industries remains a leader in the snowmobile industry today.

­In this article we'll take a look at how snowmobiles work and find out how they serve as recreation and transportation in cold climates.

There are four main components directly involved in powering and driving the snowmobile: ­

Snowmobiles also have headlamps, a seat and a windshield similar to those found on motorcycles.

Snowmobile engines are very similar to the engines found in personal watercraft. Heavier touring models tend to use the four-stroke engine, while the lighter, sportier models use the two-stroke.

Snowmobiles also have a clutch system that is basically a type of pulley-based CVT (Continuously Variable Transmission). This system consists of two pulleys, or clutches, connected by a drive belt. The primary clutch sits on the engine crankshaft. A pressure spring holds the primary's two halves apart when the engine rpm is low. As the engine begins to accelerate, the clutch weights generate enough centrifugal force to close the clutch, allowing the belt to move freely and transmit power.

Unlike a manual or automatic transmission, this system is stepless and can smoothly go back and forth between an infinite number of "gears" depending on the speed and the amount of power needed. To learn more, check out How CVTs Work.

We'll learn more about the tracks and how to steer a snowmobile next. 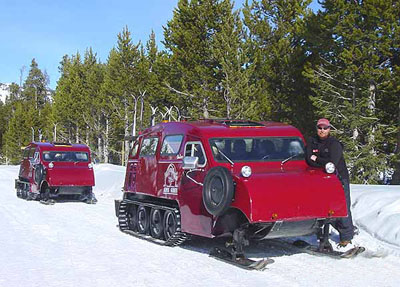 These snowcoaches illustrate some of the similarities between snowmobiles and tanks. They're essentially multi-passenger snowmobiles, with a steering wheel instead of handlebars.
Photo courtesy National Park Service

Snowmobile tracks are like tank tracks, with some key differences. They are made of light materials like rubber for added mobility and speed, while tank tracks are made of rigid materials because they must withstand concussions and explosions while carrying heavy weights. Tank tracks usually serve to steer as well as propel the vehicle, while a handlebar/ski mechanism steers snowmobiles.

In both cases, tracks succeed where wheels often fail -- they spread the vehicle weight over a greater surface area, allowing it to move on soft, slippery or unstable terrain where wheeled vehicles are unable to gain traction. Tracks keep a heavy snowmobile from sinking in soft snow, just as long, flat skis and wide, flat snowshoes spread a person's weight over a larger area.

Snowmobile tracks also provide traction on slippery surfaces like snow and ice, where regular wheels would slip and slide. The large surface area and the roughness of the treads create friction between the snowmobile and the surface, giving the snowmobile a better grip. Most snowmobilers add sharp studs to their tracks; these act like cleats on athletic shoes and sink a short distance into the ice or hard snow, gouging small holes that enable the tracks to grip the ice even tighter on particularly slippery terrain.

This snowmobiler leans into a sharp turn, which helps to keep him from flipping.
Photo courtesy Building Industry Association of Southeastern Michigan

Snowmobile skis come in varying widths and sizes for different terrain, as well as single or double-ski models. Wider skis displace the snowmobile's weight over a larger area, enabling it to "float" higher over the snow, while narrower skis allow for sharper turns.

Shock absorbers play a large part in providing a comfortable and stable ride. Springs and dampers are used in a manner similar to mountain bikes, enabling the rider to pilot their vehicle with the mobility of skis, but the stability of a tracked vehicle.

In the next section, we'll look at some of the environmental concerns associated with snowmobiles. 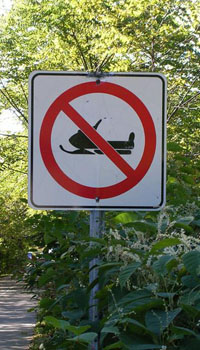 Fences and barriers often surround modern highways and roadways to protect wildlife from automobiles, and vice-versa. But snowmobiles, designed to handle varying terrain, can often travel where other vehicles can't. This has raised concerns that the snowmobile industry and environmental agencies have had to address.

Engine exhaust is a primary concern. As with cars, snowmobile engines release exhaust fumes into the atmosphere. Because snowmobilers often travel through parkland or wilderness areas not commonly used by motor vehicles, the effect of exhaust fumes on the environment has been studied as the pastime grows in popularity.

Snowmobile traffic is limited to designated trails in many areas like national parks. This ensures that vehicle traffic disturbs wildlife and vegetation as little as possible. Snowmobile trails often follow pre-existing footpaths or riverbeds, so little alteration has to be made to the natural setting. The presence of trail guides and marshals in public lands helps ensure compliance to the rules and regulations.

Noise is another issue. Early snowmobiles produced engine noise levels around 100 decibels, comparable to a diesel truck, disturbing both humans and animals in the vicinity. Technological advances used in other motor vehicles to reduce noise are also used in snowmobiles, like foam padding between the engine and hood and regulators on the exhaust and intake mechanisms.

In February 2005, 17 snowmobilers were arrested for not only going off-trail in Yellowstone National Park, but also for using their snowmobiles to enter illegally.
Photo courtesy National Park Service

Learn about the safety precautions that snowmobilers must take in the next section.

The Society of Automotive Engineers sponsors the , an annual competition challenging engineering students to modify existing designs, with an eye on building cleaner, cost-effective, high-performance snowmobiles. Recent entries in the Challenge have included electric engine models designed by students at Utah State and McGill University. 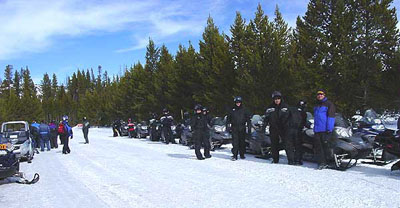 The clothing and helmets of these snowmobilers keep them well-protected from the cold.
Photo courtesy National Park Service

Modern snowmobiles are made of lighter, more durable materials and faster, more fuel-effective engines. This provides greater excitement for the rider, but also increases the possibility of accidents.

A snowmobile can weigh in excess of 600 pounds, not including the weight of the driver. Engine sizes can reach 1000 cubic centimeters (61 cubic inches), comparable to a mid-size motorcycle, with top speeds nearing 90 MPH on lighter, high-performance sleds. Snowmobiles have the advantage of being lower and wider than motorcycles, reducing the risk of tipping over, but riders can be thrown more easily due to their open design. Braking distances on snow and ice are also longer than on asphalt roads, due to reduced traction on the wet terrain.

Protective clothing serves double-duty for snowmobilers -- it must protect them not only from hazards caused by speed and noise, but also from the cold and wind. The waterproof nylon jackets and pants often sported by snowmobilers are very similar to those worn by snowboarders and skiers. Emphasis is on keeping the rider warm and dry, with inside layers wicking moisture outwards.

Similarly, snowmobile helmets draw heavily on motorcycle designs. Many leading manufacturers design models for snowmobilers, motorcyclists and all-terrain vehicle riders. (See the sidebar in How Motorcycles Work for basic helmet design). Snowmobile helmets add an anti-fog coating to the visor; cold, moist air on the outside meeting warm breath on the inside would cause condensation otherwise. Many helmets also incorporate a breath-guard over the mouth and nose, which keeps incoming air warmer while guiding warm breath away from the visor.

Gloves and boots are important accessories, as fingers and toes are especially vulnerable to frostbite in cold conditions. Snowmobile gloves typically combine thick palms (for durability while holding on to the handlebars) with articulated fingers and wrists (for mobility when braking and steering). Popular boot designs incorporate thick rubber soles with heavy grips, and removable liners that can dry quickly between rides. Of course, these accessories must be waterproof as well.

Using established hand signals when snowmobiling is another way to stay safe.

Ultimately, snowmobile safety depends on the person at the handlebars. Each state and province sets its own regulations regarding helmets and licensing, with national parks and private trails often imposing additional regulations on riders.

Organizations such as the Canadian Council of Snowmobile Organizations and American Council of Snowmobile Associations represent local and regional riders' clubs and associations, often advocating on their behalf in safety and legislative discussions. They also work towards uniformity in trail signage and networking snowmobile trails, and promote tourism between Canadian and American enthusiasts and their counterparts in Europe.

For lots more information about snowmobiles and related topics, check out the links on the next page.