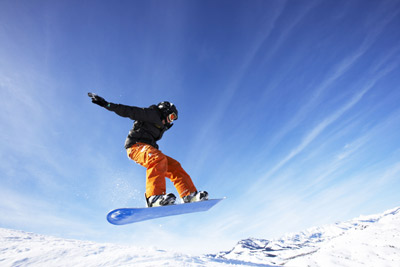 This boy is catching some air in Sun Valley, Idaho.
Laurie and Charles/The Image Bank/Getty Images

Though snowboarding is only a few decades old, it already has its share of legends. Here are a few of the notable names who've made their mark in the sport:

Shannon Dunn -- She may be small (5'2" to be exact), but Shannon Dunn is a force to be reckoned with on the slopes. She's been snowboarding since 1979 and was the first American to win a snowboarding medal at the 1998 Olympics, where she took the bronze medal in the halfpipe competition.

Terje Haakenson -- He's been alternately called the "Michael Jordan" and "the god" of snowboarding for his unbelievable tricks. Haakenson has won countless competitions and the ultimate respect of many snowboarding fans.

Craig Kelly -- He was one of the most successful snowboarders in the world, with four World Championship and three U.S. Open championship titles under his belt, when retiring from the sport to work as a backcountry guide. In 2003, at age 36, Kelly was killed during an avalanche while guiding a heliskiing trip in British Columbia.

Leslie McKenna -- Though she started out on skis, this Brit has evolved into one of the top snowboarders in the world. She's won many world snowboarding competitions and was founder of the British Women's Snowboarding Team.

Todd Richards -- He has been riding professionally for 17 years and is known as one of the best freestyle riders around. His skills earned Richards a spot in the very first Olympic snowboarding events. Snowboarding isn't his only talent; Richards also starred in the 2001 movie, "Out Cold."

Shaun White -- His flaming red hair and airborne moves have earned Shaun White the nickname the "flying tomato." By the time White was seven, he already had his first sponsor. Since then, he's become one of the most popular snowboarders in the country. He has his own video game and clothing line, and he's even been featured (wearing his Olympic gold medal and draped in an American flag) on the cover of "Rolling Stone."

Snowboarding isn't the rebel sport many people once thought it was. It has its own set of rules, which snowboarders need to follow. These rules include: