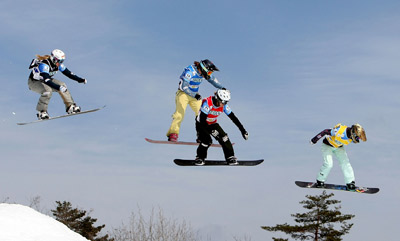 The very first competitive snowboarding event was a small contest called King of the Mountain, which was held in Leadville, Colo. back in 1981. The next year, the first National Snowboarding Championships were held at Suicide Six near Woodstock, Vt. The event was so small that the organizers had to use an upturned kitchen table as the starting gate. In 1983, snowboarders from around the world converged for the first U.S. Open Snowboarding Championship, founded by Jake Burton Carpenter.

There are also "big-air" competitions like ESPN's X Games and the World Extreme Snowboarding Championships, in which snowboarders perform more extreme stunts.

Next, meet some of the snowboarders who've taken gold at the world's top events.

It took more than three decades for snowboarding to earn its place as a legitimate sport, and the ultimate mark of that legitimacy came in 1998 when snowboarding was added to the Winter Olympic Games.

The first Winter Olympics to hold snowboarding (in Nagano, Japan) was rocked when one of the top snowboarders in the world -- Terje Hakonsen of Norway -- refused to compete because he was upset that snowboarding fell under the wing of the International Skiing Foundation rather than the International Snowboarding Federation. Also, snowboarder Ross Rebagliati was stripped of his giant slalom gold medal after a drug test revealed traces of marijuana in his system (the medal was later given back because marijuana isn't deemed a performance-enhancing drug).