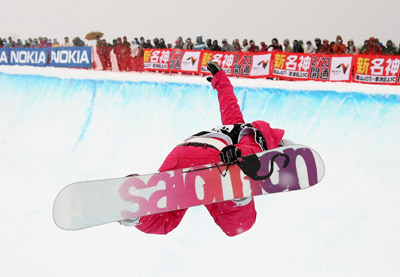 There's more to snowboarding than standing on a curved piece of wood and hurtling yourself down a mountain. There are hundreds of subtle techniques and tricks that separate the novices from the pros on the slopes.

There are also several main snowboarding styles. In freeride, the snowboarder rides down the mountain, taking advantage of the landscape's natural bumps and curves to catch air and do tricks. Freestyle focuses on tricks, such as spins, jumps, grabbing the board in mid-air, and sliding down rails. Resorts have their own sections -- called snowparks -- for freestyle devotees. Alpine is a style similar to skiing that emphasizes fast speed and hard turns. Halfpipe is a style played out in a U-shaped trench also called a halfpipe. As snowboarders ride down one side and up another, they gather enough momentum to go airborne and do tricks.

The most experienced and agile snowboarders -- the ones who have become legendary in snowboarding circles -- have gotten their reputations because of the incredible jumps, spins, grabs and flips they can do. These are just a few of the mind-bending tricks great snowboarders can pull off:

Many of these moves are included in snowboarding competitions. Read on to learn more about these competitions.