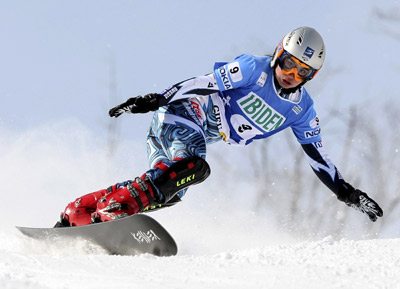 The basic and most fundamental piece of equipment to the snowboarder is, of course, the snowboard. Depending on how fancy you get, a new board can set you back anywhere from $99 for a basic model to $1,000 for professional quality. Higher-end brands are usually called the "Signature Series" because they're designed and signed by professional snowboarders.

Boards come in three basic styles. The Freeride/All Mountain Board is the most popular type of board. It's soft and maneuverable enough for beginners to handle, yet rigid enough to make quick turns. The ends are slightly turned up for doing freestyle maneuvers. The Freestyle/Technical Board is short, light and flexible. It's built for doing spins and other tricks, but it's not stable enough to make quick or tight turns. The Carving/Alpine Board is long, narrow and stiff. It's built for speed and quick turns (which makes it ideal for racing), but it isn't a good choice for beginning riders because of its lack of stability.

Snowboards are made from a wood core, surrounded by fiberglass with steel edges. The wood core forms the center of the board. The wood is laminated and cut to the correct dimensions. Steel edges are attached around the edges to help the rider turn and control his or her speed. Fiberglass is placed on the top and bottom of the wood core to keep the board stiff, but light. Resin is used to attach all the different pieces of the snowboard together. Bindings, which hold the boots on the snowboard, are secured to stainless steel inserts on top of the board.

There are several terms that help describe a snowboard:

The camber is the curve between the front tip and the tail, or rear tip, of the snowboard when it lies on a flat surface. A springy camber will help the board turn easily (which is good for freestyle moves). A flat camber may be a sign that the board is worn out. The effective edge is the metal edge that contacts the snow when the board is turning. A longer effective edge makes the board more stable, but a shorter effective edge makes for easier turns. The flex point is the point between the two bindings where the flex begins or ends. A soft flex handles bumps better, but a stiff flex enables the board to get a grip on ice. The waist width is the narrowest part of the board. People with wider feet need a wider board.

Now that you know the basics of the board, find out what tricks you can make it do.

Selecting the Best Board

When choosing a board, consider the following:

If you don't know which style to get, rent snowboards at a resort or a sporting goods store to try out a few styles.