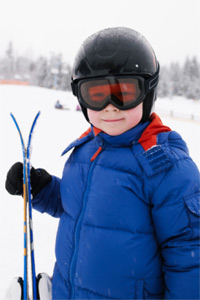 Kids and others learning how to ski often start on short skis, which can be much easier to maneuver than their longer counterparts.
Thomas Barwick/Getty Images

Ski sizing or length depends on several factors, including age, height, weight and skill level. As a general rule, people often look for skis that reach the chin but stop below the eyes. With so many types of skis now out there, it's difficult to stick to one guiding rule, but this one can be a good place to start. For adults, whether beginners or advanced, skis taller than the skier's height sometimes are recommended. It's also said that heavier people should have longer skis to better distribute their weight, as should experienced skiers who thrive at high speeds or in rough conditions.

The ski's height and width should be printed somewhere near the ski's tail. Most skis also include a printed number that represents its turning radius, with smaller numbers (say, around 15 meters) indicating that the skis are made for sharper, faster turns.

There are other important factors in choosing a ski, including flexibility. More flexible skis are ideal for beginning to moderate skiers who don't go very fast and need their skis to be flexible to allow them to make turns easily. Less flexible skis are tougher, making them ideal for difficult conditions, fast speeds and sharp, bone-rattling turns. Finally, you want to consider terrain -- where will you be skiing? In one type of environment or many? How often will you be skiing? People who hit the slopes a lot may want skis that require a higher skill level, as they'll "grow" into them.

With all of those factors in mind, as well as the idea that you should probably talk with a retailer about your options, let's take an example of a 180-pound (82-kilogram) male skier. According to Play It Again Sports, an intermediate skier of that weight should look for 170- to 180-centimeter skis [source: Play It Again Sports]. If he's an advanced all-mountain skier, 180-centimeter to 190-centimeter skis are best. On the other hand, that same advanced skier might wish to go with shorter skis, which make it easier to perform sharp turns while sacrificing some stability. In that case, 160-centimeter or 170-centimeter carving skis might be best.

A ski sizing calculator can help you to make a more informed decision. Using the Frostyrider calculator, we input information for a 6-foot (1.8 meter), 180-pound male skier, who wants to ski all-mountain terrain not too aggressively and at an intermediate level. For this skier, Frostyrider's calculator recommends 168-centimeter skis -- only a few centimeters shorter than those recommended by our other chart [source: Frostyrider].

Don't head for the gondola yet. You still need boots and bindings.