Twin-tip Skis and Other Ski Types 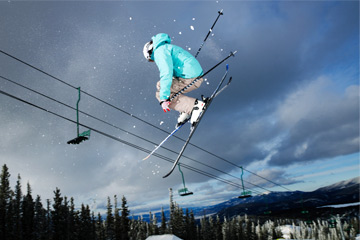 If this sort of thing looks like fun, then you may want to try twin-tip skis. They could help you land whatever hot-dogging maneuver you’re shooting for.
Thomas Barwick/Getty Images

In the broad category of alpine/downhill skis, you'll find several different types of skis. Twin-tip skis curve at the tip and the tail. This design helps freestyle skiers to land difficult jumps and even to ski backward. However, twin tips have expanded beyond the freestyle skier market and can now be found, in various forms, as modified alpine, or downhill, skis. Snowboarders who switch to skiing also tend to pick them.

Among twin-tip skis, two options exist: park-and-pipe skis and all-mountain skis. The former are designed for use in a terrain park and the requisite jumping, tricks, harsh turns and rough landings. All-mountain twin tips, as their name implies, are wider in the waist and so better suited to a variety of conditions across the mountain.

All-mountain skis serve as the jack-of-all-trade skis; you also may know them as all-purpose, mid-fat skis or even the one-ski quiver -- ideally, the one set of skis you'll ever need. All-mountain skis are suitable for most skiers and most mountain conditions, and that's why they're the most popular type of snow skis. Again, you have choices: narrow-waisted or wide-waisted. Narrow-waisted all-mountain skis, or carving skis, are usually around 68 millimeters to 75 millimeters. Mid-fat skis run 76 to 88 millimeters, making them usable in powder conditions or on groomed slopes.

Racing skis are reserved for the professionals, and they look like it, too. They're long and strong to handle high speeds. These Barbie doll-like skis are impossibly narrow in the waist (68 millimeters at most). They're also not nearly as flexible as other types of skis because they have to be able to hold up in icy or hard-packed snow conditions. Racers don't want their skis to bend or twist when they are moving at high speeds or attempting a sharp turn.

Powder skis, also called big-mountain or backcountry skis, have a wide waist width, making them ideal for places with heavy powder. That extra surface area helps skiers to float above premium powder. However, they can be difficult to use on slopes with less snow or groomed trails, especially for beginning to moderate skiers. More experienced skiers -- and those with some extra cash -- sometimes buy powder skis as an alternate pair, to be used when conditions warrant it [source: Skis.com]. True backcountry skis have a waist width of 90 to 110 millimeters, while powder skis are easily the widest type of ski, measuring from 110 to 130 millimeters.

Now that we've looked at some of the many types of skis, let's figure out how to size a pair of skis.