by Tom Harris
NEXT PAGE 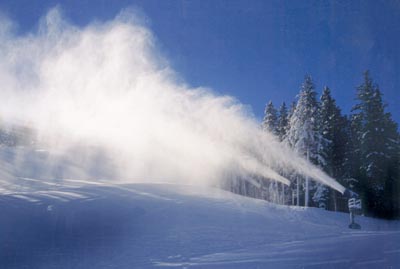 In the ear­ly to mid 20th century, the sport o­f snow skiing skyrocketed in popularity. As more and more people discovered the sport and made it a yearly tradition,­ ski slopes became extremely profitable businesses. But resort owners had a major problem: In their line of work, success was completely dependent on the weather. If it didn't snow, or didn't snow enough, they had to close everything down until the weather decided to cooperate. In many parts of the world, the skiing season was limited to a month or two.

The solution, of course, was to figure out a way to make snow when you needed it, in case nature failed to provide. The result was an invention called the snow gun. This device proved useful even when natural snow was plen­tiful because it gave resort owners greater control over the consistency of the top layer of snow, allowing them to create better skiing conditions. These days, sn­ow-making machines are standard equipment in the vast majority of ski resorts around the world. They have made it possible for many resorts to stay open four months or more a year, and there are even a few indoor slopes that stay open year-round!

­Snow makers can be a skier’s best friend, but they’re also valuable to indoor ice climbing facilities. Check out the ice climbing article, video and images at Discovery’s Fearless Planet to learn more.

In this article, we'll look at these snow guns to see how they work, what they can do and how operators use them to create ideal skiing conditions. So the next time you go skiing, you'll know exactly where all that perfect snow is coming from!