Are sled dogs a help or hindrance in the Alaskan wilderness? 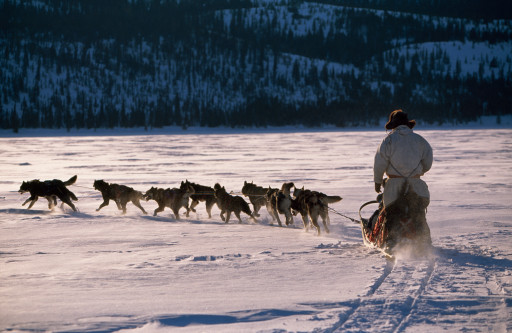 Managing a pack of sled dogs can be harder than it looks.
Steve Casmiro/Getty Images

Sled dogs have a host of special abilities that could potentially help you in the snowy Alaskan wilderness. But the task of overseeing a dozen or so pups can be an avalanche of responsibility.

First, if a sled dog becomes injured, won't that hold you back? Sled dogs' endurance often allows them to press on in spite of minor injuries. However, if a dog cannot keep up with the pack, you may have to put it on the sled with you. That will add around 40 pounds (18 kilograms) or so and slow your trip, depending on the strength and number of the rest of the pack. Individual dogs may also start fights that you must spend precious energy breaking up.

Overexertion in the cold can make you vulnerable to hypothermia and frostbite. When you break up a dog fight or stomp out a path for them to run on with your snowshoes, you may sweat, lowering your internal temperature. That increases your risk of illness or death when the temperature outside already chills you to the bone.

On the other hand, sled dogs pulling you can save much of the heat you would lose walking or running on foot. Running is a natural instinct for sled dog breeds. The dogs enjoy it and will run for miles on their own. But because of this free-spirited nature, you must know how to manage the pack. Driving a sled isn't like driving a car -- you can't just press on the gas and go. Sled dogs are prone to stubbornness, and if they don't want to move, they won't.

Without control, you could end up in dangerous situations, such as being dragged behind the sled, led through brush or even thrown off. When attached to the sled, the dogs should not run off, and if you're thrown off, they'll likely return. But, for instance, if a storm whips up and your dogs become unharnessed from the sled, there's a chance they'll bolt. In that case, their natural urge to run may send them miles away.

Sled dogs can travel up to around 100 miles (160 kilometers) per day, but they aren't particularly fast. While the dogs will carry you around 5 to 12 miles per hour (8 to 16 kilometers per hour), you can zip along on a snowmobile at speeds comparable to cars. Although some areas require you to go slower on snowmobiles, many models can exceed speeds of 90 miles per hour (144 kilometers per hour). Nevertheless, centuries of sled dog use in the Alaskan wilderness has proven that with the proper control, slow and steady can win the race.

For more detailed information about sled dogs and wilderness survival, peruse the links below.

Many sled dogs share physical characteristics with wolves, but they don't share temperaments. Although some breeds are products of dog-wolf crossbreeding, that took place thousands of years ago, far removing today's sled dogs from any wolf ancestors. Instead, sled dogs are known for their amiable temperaments. If they do show aggressive behavior, it will likely be toward other members of the pack.