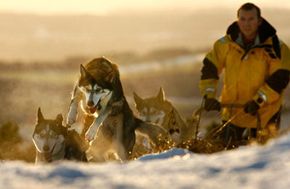 ­They're physical marvels­ -- able to endure extreme conditions for extensive periods of time while running fast and pulling more than their own weight. Sled dogs have been around for generations, and today they remain a large part of a musher's, or dog driver's, ­life.In arctic regions, some 35,000 years ago, Eskimos' dogs bred with wolves and other dogs. Their offspring were well-adapted to the cold and snow. There's no saying exactly when someone thought to have dogs pull sleds, but it was well before 1000 B.C. [source: Casey]. Dogsleds provided a means of transportation and a way to haul goods.

In more recent times, Canadian and U.S. police used sled dogs to maintain order around gold mines in the late 1800s [source: Casey]. Also in the 1800s, explorers employed sled dogs on Arctic and Antarctic expeditions. By the 1920s, other means of travel began replacing dogsleds. But in 1925, in hazardous conditions, Alaskan sled dogs proved vital when they were used to transport diphtheria serum from Nenana to Nome to stop an epidemic.

Dogsled racing in Alaska formally began in 1908, when sled dog owners in Nome, Alaska, held the first All-Alaska Sweepstakes, a 408-mile (657 km) race from Nome to Candle and back. And in 1973, the inaugural Iditarod Trail Sled Dog Race -- a commemoration of the 1925 serum run from Nenana to Nome -- took place on a route covering more than 1,000 miles in Alaska. In 1984, the first 1,000-mile (1,609 km) Yukon Quest race began in Canada and ended in Alaska. There are more competitions in many of the continental United States, and some take place on dry land. In addition to endurance races, s­led-dog events include sprint races, weight pulls (in which dogs try to pull the most weight) and freight races (in which dogs try to pull a weighted sled the fastest).

Sled dogs have also had a place in the military. During World Wars I and II, they covered harsh terrain to haul heavy equipment and assisted with search-and-rescue operations.

In recent years, people looking for unique outings have gone on recreational trips with sled dogs. A number of companies market tourist treks via dog sled for adventure travelers.

In the next section, we'll learn about what makes a sled dog able to withstand the rigors of crossing harsh terrain.

­­Baldy of Nome - Musher Scotty Allan's dog who helped him win multiple All-Alaska Sweepstakes in the early 1900s and was featured in Esther Birdsall Darling's book "Baldy of Nome."

Balto - The lead dog in the final segment of the 1925 Alaskan serum run from Nenana to Nome (the Iditarod race commemorates the run), who is immortalized with a statue in New York City's Central Park.

Buck - Fictional star of Jack London's "Call of the Wild."

Taro and Jiro - Survivors of a 1958 Japanese expedition to Antarctica, the dogs' story was told in the movies "Nankyoku Monogatari" and "Eight Below."

Togo­ - The lead dog for the longest leg of the 1925 Alaskan serum run from Nenana to Nome, an accomplishment some feel was overshadowed by Balto's fame.

Navarreof the North - grandson of Baldy of Nome and featured in Esther Birdsall Darling's book "Navarre of the North." 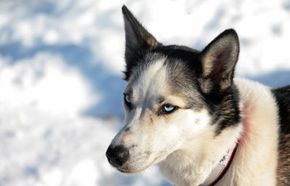 Mushers look for easygoing dogs that are mentally tough and up to the challenge of pulling a racing sled.
Jim Watson/AFP/Getty Images

Many breeds of dogs are used to pull sleds, including official American Kennel Club breeds such as the Siberian husky, malamute and Samoyed. However, many sled dogs are of mixed breed and are called Alaska husky or Eskimo dogs. While some sled dogs may have wolf bloodlines, it's generally not desirable to crossbreed sled dogs with wolves.

Sled dogs are bred for their speed and endurance as well as leadership qualities. They are big dogs with thick coats and wide, flat feet. They sleep with their tails covering their noses to keep warm. Dogs that weigh around 40 to 45 pounds (18 to 20 kg) are the ideal size to pull sleds, but some may weigh as much as 85 pounds (38.5 kg).

Young dogs that are enthusiastic runners, easygoing and mentally tough are good choices for sled dogs. A dog's gender matters little -- both male and female dogs are considered equally.

For racing, the most intelligent and fastest dogs are picked to be lead dogs and run in the front of the pack. Behind them run swing dogs, whose job is to direct the team around turns and curves. At the back of the dog team are the wheel dogs or wheelers, who are right in front of the sled and are usually the largest and strongest of the team. The rest of the dogs are known simply as team dogs.

­Dogs are typically from 2 to 10 years old when they pull sleds. After they retire, they might remain with their owner at a kennel or be adopted as pets by others. Rescue groups for sled dogs take in unwanted dogs and care for them, trying to place them in loving homes.

While snowmobiles (also called snow machines), helicopters and airplanes are now often used in place of sled dogs, there are still times when canine transportation is preferred. Harsh weather conditions can make flying hazardous, and certain terrain can be more difficult for snow machines to cross than for dogs. Dogs can be more reliable than man-made machines, they're good companions to have on long treks and they can be cheaper to own than other forms of transportation.

In the next section, we'll find out how a dog becomes a sled dog and if most mushers treat their pack humanely.

Despite their physical capabilities and even temperaments, sled dogs face danger when they pull a sled. They often cross snowy, icy, uneven terrain, running at fast speeds. Their feet can get hurt, they can get dehydrated and they can fall through ice. Some dogs simply die from overexertion. Attacks by animals, including moose and wolves, sometimes occur. While not frequent, another dog on the team could start a dog fight. Other dangers include getting tangled in the lines, or breaking free and getting lost. 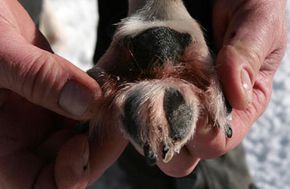 Veterinarians keep an eye on dogs during the Iditarod Trail Sled Dog Race to make sure the furry athletes are healthy. The race can be hard on the dogs, who have to cross dangerous, icy terrain at high speed.
Jim Watson/AFP/Getty Images

The number of sled dogs at a typical kennel is around 75, though some might house as few as 20 or as many as 150. Many kennel owners are avid mushers and compete in dog sled races. They also train other mushers and sell and lease dogs.

The organization Mush With PRIDE (Providing Responsible Information on a Dog’s Environment) was formed to address how sled dogs are cared for. Guidelines developed by the group give advice on breeding and maintaining a kennel.

The training for each team of racing dogs varies by musher (or whomever is preparing the dogs to race). Conditioning the dogs to run long distances is vital, and teams may cover 2,000 to 3,000 miles (3,219 to 4,828 km) in the course of training leading up to an endurance race. Since training may take place year-round, the dogs sometimes run on dry land, and sometimes pull all-terrain vehicles.

Dog owners start grooming their dogs to pull sleds at a very young age. When they are a couple of months old, they may be fitted with a harness and collar, just so they get used to wearing them. As they get older, a small object may be attached to the harness to practice pulling weight. Mushers also start teaching the dogs verbal commands. When dogs are ready to train alongside a team, at around 6 to 8 months old, they start by pulling light loads for short distances. Over time, they build up their strength and stamina and are able to go farther and pull more.

Sled dogs that are well cared for and loved by their owners are quite friendly and gentle. While they may fight with other dogs, it is rare that a sled dog would be aggressive toward people. Mushers have been quoted as saying that they take better care of their dogs than themselves, and that the dogs eat better than they do. Relationships between dog and musher vary, but most mushers consider their dogs family. Mushers generally follow the reasoning that a dog that’s not properly cared for will not perform, so it wouldn’t make sense to mistreat dogs.

For races such as the Iditarod, veterinarians are on hand to examine dogs, and race rules require proof of certain vaccines and check-ups. Dogs are implanted with microchips to help keep track of them. The International Sled Dog Veterinary Medical Association is a group of veterinarians who are dedicated to the welfare of sled dogs.

In the next section, we’ll look at how sled dogs prepare for a race.­

In 1999, retired schoolteacher Margery Glickman founded an activist group, the Sled Dog Action Coalition, to improve the conditions for dogs racing in the Iditarod. People for the Ethical Treatment of Animals (PETA) and the Humane Society of the United States have also taken issue with the Iditarod. While race officials disagree that dogs are mistreated, and there is an Iditarod rule stating, “There will be no cruel or inhumane treatment of dogs,” there have been incidents of animal abuse by Iditarod mushers, including:

Getting Ready for the Race 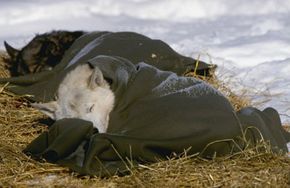 Sled dogs must eat around 10,000 calories per day to generate enough energy for sled racing. At night they sleep with their tails around their noses to keep warm.
Ezra O. Shaw /Allsport

Racing sled dogs need to eat around 10,000 calories per day. During the Iditarod race, that translates to about 2,000 pounds (907 kg) of food for one team for the entire race. Meat is the main ingredient, but they also consume other fats, oils, dry dog foods and vitamin supplements. Dogs eat at each of the more than two dozen checkpoints on the Iditarod route, but they also get snacks every few hours. Gear for dogs includes fabric booties to protect their feet from the elements, and a sled team may go through 2,000 booties during a race.

The number of dogs pulling the sled varies by race and by musher. In the Iditarod, there are a maximum of 16 dogs on a team. At the race’s start, there must be between 12 and 16 dogs per entrant. At the race’s end, at least six dogs must be part of the team that crosses the finish line.

Skijoring is another type of race using dogs. Rather than pulling a sled, the dogs pull a racer on skis.
Bill Curtsinger/National Geographic/Getty Images

During the Iditarod, teams typically travel in the 5 to12 miles per hour (8 to 16 kph) range and might run for six or eight hours straight. When dogs fail to work together as a team, or a musher can't properly direct his or her team, the lines can become tangled and cause problems.

For more information on sled dogs and related articles, please see the next page.

­Skijoring and Other Related Sports 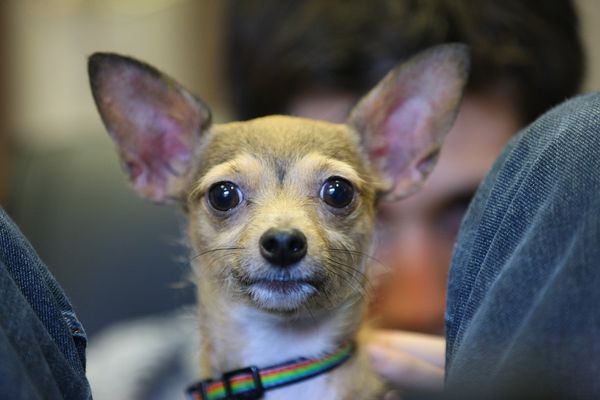 Up Next
How Dogs Work
Explore More 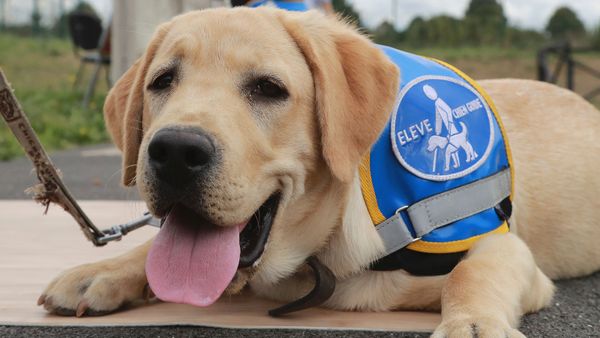 You May Like
How Guide Dogs Work
Explore More 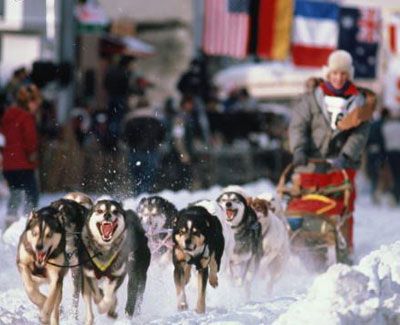