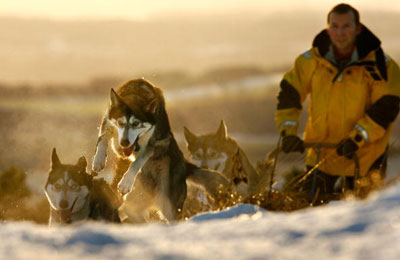 ­They're physical marvels­ -- able to endure extreme conditions for extensive periods of time while running fast and pulling more than their own weight. Sled dogs have been around for generations, and today they remain a large part of a musher's, or dog driver's, ­life.In arctic regions, some 35,000 years ago, Eskimos' dogs bred with wolves and other dogs. Their offspring were well-adapted to the cold and snow. There's no saying exactly when someone thought to have dogs pull sleds, but it was well before 1000 B.C. [source: Casey]. Dogsleds provided a means of transportation and a way to haul goods.

In more recent times, Canadian and U.S. police used sled dogs to maintain order around gold mines in the late 1800s [source: Casey]. Also in the 1800s, explorers employed sled dogs on Arctic and Antarctic expeditions. By the 1920s, other means of travel began replacing dogsleds. But in 1925, in hazardous conditions, Alaskan sled dogs proved vital when they were used to transport diphtheria serum from Nenana to Nome to stop an epidemic.

Dogsled racing in Alaska formally began in 1908, when sled dog owners in Nome, Alaska, held the first All-Alaska Sweepstakes, a 408-mile (657 km) race from Nome to Candle and back. And in 1973, the inaugural Iditarod Trail Sled Dog Race -- a commemoration of the 1925 serum run from Nenana to Nome -- took place on a route covering more than 1,000 miles in Alaska. In 1984, the first 1,000-mile (1,609 km) Yukon Quest race began in Canada and ended in Alaska. There are more competitions in many of the continental United States, and some take place on dry land. In addition to endurance races, s­led-dog events include sprint races, weight pulls (in which dogs try to pull the most weight) and freight races (in which dogs try to pull a weighted sled the fastest).

Sled dogs have also had a place in the military. During World Wars I and II, they covered harsh terrain to haul heavy equipment and assisted with search-and-rescue operations.

In recent years, people looking for unique outings have gone on recreational trips with sled dogs. A number of companies market tourist treks via dog sled for adventure travelers.

In the next section, we'll learn about what makes a sled dog able to withstand the rigors of crossing harsh terrain.

­­Baldy of Nome - Musher Scotty Allan's dog who helped him win multiple All-Alaska Sweepstakes in the early 1900s and was featured in Esther Birdsall Darling's book "Baldy of Nome."

Balto - The lead dog in the final segment of the 1925 Alaskan serum run from Nenana to Nome (the Iditarod race commemorates the run), who is immortalized with a statue in New York City's Central Park.

Buck - Fictional star of Jack London's "Call of the Wild."

Taro and Jiro - Survivors of a 1958 Japanese expedition to Antarctica, the dogs' story was told in the movies "Nankyoku Monogatari" and "Eight Below."

Togo­ - The lead dog for the longest leg of the 1925 Alaskan serum run from Nenana to Nome, an accomplishment some feel was overshadowed by Balto's fame.