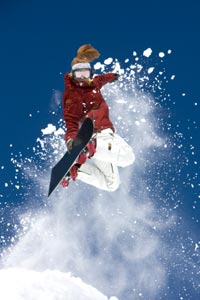 There's a whole spectrum of snow conditions skiers will potentially find waiting for them up on the slopes, ranging from powder all the way to ice. The former is greatly preferred, since the icier and choppier the conditions, the more difficult and dangerous the skiing. Lots of factors affect snow conditions, including snowfall, temperature, altitude and ski traffic. A basic rundown of the various quality levels of ski area snow include: