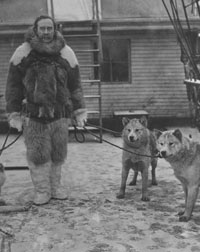 People have always had the desire to explore new places. Explorers throughout history have been motivated -- at least in part -- by the promise of fame and fortune, and North Pole exploration is no exception. The first North Pole explorers were in search of the Northwest Passage, a route through the Arctic that would create easier trade -- and great wealth -- for the country that discovered it. When these explorers came back with tales of diamonds and coal near the Pole, the world started seeing the Arctic as a frozen treasure chest. In fact, a U.S. Geological Survey estimates that nearly 25 percent of the world's undiscovered oil and gas are buried in the Arctic, which is a big reason for the disputes among the countries that are vying to claim the region for themselves [source: Leapman].

There were occasional North Pole expeditions in the 18th century (in 1755, the British Parliament offered a reward to the first ship to come within a degree of the Pole), but it wasn't until the early 1900s that things really got going. In 1908, American Frederick Albert Cook was the first person to claim to have reached the North Pole. But his countryman Robert Edwin Peary, with support from Cook's traveling companions, disputed the claim, and Cook was widely discredited.

Peary (with a team of 24 men, 19 sledges and 133 sled dogs) ended up making the first undisputed visit to the North Pole, on April 6, 1909. But there's still some controversy attached to the claim, mostly because of Peary's improbable 37-day time frame. Most expeditions of the era took months -- at least -- to come close to the goal. However, in April 2005, explorer Tom Avery recreated Peary's sled expedition with the same materials and supplies; he beat Peary's time by five hours. Some still doubt that Peary actually made it to the exact geographic North Pole, but he usually gets the credit for being first.

Who owns the North Pole?

From the 15th through the 20th century, the Doctrine of Discovery was recognized by European and American explorers as the go-to guideline for ownership of territory. The doctrine uses a basic "first-come, first-served" rule -- a region belongs to whatever country got there first. Remember how the United States "won" the race to the moon in 1969 by planting a flag on the lunar surface?

Today, the United Nations has taken control of the issue. According to the U.N. Convention on the Laws of the Sea, claims to the North Pole are based on a country's continental shelf (undersea extensions of land).

In 2007, Russian mini-submarines -- on a mission to explore natural gas and oil deposits under the North Pole -- planted Russian flags below the Arctic ice. The Canadians were not pleased, mostly because they claim that the North Pole is theirs. So do Denmark (via Greenland), Norway and the United States.