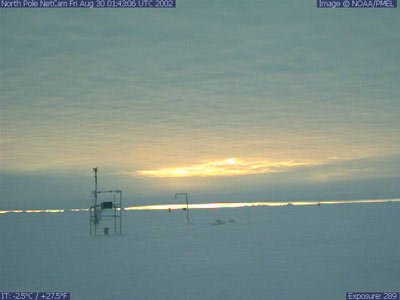 The NOAA North Pole webcam shows the sun low in the sky just before the fall equinox.
Photo courtesy NOAA

There are two North Poles. The one most people think of is the geographic North Pole, which is located approximately 450 miles (724 kilometers) north of Greenland, at 90 degrees north latitude.

The magnetic North Pole is based on the Earth's magnetic field and is slowly drifting across the Canadian Arctic (see Why does the North Pole move?).

Because all lines of longitude converge at the North Pole, it's not technically in any time zone (or, it's in every time zone, depending on your perspective). As a result, we generally use Coordinated Universal Time (UTC) at the North Pole. Coordinated Universal Time is used mostly in astronomy and navigation: It's similar to Greenwich Mean Time (the time kept on the Greenwich meridian, longitude zero) but scientifically more precise.

As a result of all this, the North Pole is obviously cold. In the winter, when the North Pole is farthest from the sun on the Earth's axis, the average temperature is -40 degrees Fahrenheit (-40 Celsius) during December and January, but can dip into the negative 50s [sources: Smith, Goddard Space Flight Center]. The seawater beneath the ice of the North Pole is a relatively mild -28 degrees F (-33 C). In the summer, the Pole averages 32 F (0 C). But the North Pole isn't as cold as it used to be. To learn more about the melting ice, read Why is Arctic ice melting 50 years too fast?

What kind of wildlife can survive at such temperatures? Read on to find out.

The North Pole isn't the coldest place on Earth (that would be Antarctica). It isn't even the coldest place in the Northern Hemisphere. That title belongs to Verhoyansk, a village in northeastern Siberia, which has recorded temperatures of 94 degrees below zero F (-70 C). The village is confined by mountains, so the cold air gets trapped more easily there than it does at the North Pole [source: Goddard Space Flight Center].