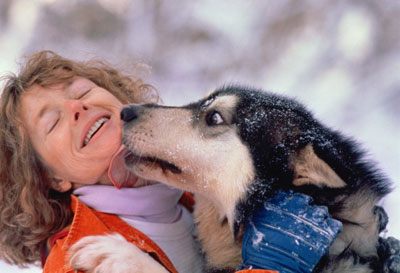 Mushers have close relationships with their dogs, and often put their needs before their own.
Paul Souders/Getty Images

When mushers compete in the Iditarod Trail Sled Dog Race, it is primarily a feat of one musher and a team of dogs. They rely on their training and skills, and, to a much lesser extent, the race officials and the sportsmanship of other mushers, to reach the finish line. In the Iditarod, they may only accept outside assistance for certain instances, such as recovering a loose dog or an entire team of dogs.

The Iditarod rule on sportsmanship states, "Any musher must use civil conduct and act in a sportsmanlike manner throughout the race. Abusive treatment of anyone is prohibited." And the good Samaritan rule states, "A musher will not be penalized for aiding another musher in an emergency. Incidents must be explained to race officials at the next checkpoint."

While there is competitiveness among mushers, there's also a camaraderie and bond between them. There is certain trail etiquette - helping track down a lost dog, sharing supplies when someone's in need, parking dogs off trail when taking a break, and generally watching out for each other. Each year, the recipient of the Fred Meyer Sportsmanship Award is chosen by his or her fellow mushers.

Being prepared with adequate -- but not too much -- gear is a critical component of the Iditarod race. Mushers are required to pack a sleeping bag, an ax, snowshoes, and a cooker or pot and fuel for boiling water. They outfit themselves in attire that will protect them from the harsh elements, including warm boots and eye goggles. Ski poles, a gun, a headlamp and food are among other race necessities. Some supplies are shipped ahead to checkpoints along the race route, but others are carried in the sled and in coat pockets.

The Iditarod's race rules require that "some type of sled or toboggan must be drawn" but the specifications are up to each racer. Typically, the sleds used weigh around 100 pounds (easily twice that once loaded with gear) and cost around U.S. $1,500. They have a basket where gear is carried and a tired dog can rest, and are outfitted with a braking device. Mushers stand on the sled's runners, which are usually made of wood and covered in plastic or Teflon and extend out from the sled's basket.

During a race, mushers often put the well-being of their dogs ahead of their own. Tending to the dogs' tired bodies, getting them fed and settled into a bed of straw, all comes before feeding and resting oneself.

Mushers nap on top of their sleds while on the trail or in sleeping bags in cabins at checkpoints, catching 15 minutes to two hours of sleep here and there. Some mushers prefer to camp on the trail, away from the checkpoints, finding it calmer. Due to exhaustion, mushers sometimes fall asleep while mushing, but that can be dangerous for both mushers and dogs.

Iditarod mushers send food for themselves and their dogs to checkpoints along the course before the race. The food has been precooked and frozen, and can then be warmed up when it's time to eat. They snack on the trail and eat bigger meals at the checkpoints. They nosh on everything from pizza and steaks to lasagna and chicken. They also sometimes eat meals provided by volunteers and villagers along the trail, or from eateries in the towns.

Mushers typically feed their dogs before they feed themselves, with meat being the main ingredient, and other fats, oils, dry dog foods and vitamin supplements included. They use a cooker or pot and boiling water to warm the food.

For the mushers' and dogs' health and well-being, they are required to take checkpoint breaks during the Iditarod race. There is a mandatory 24-hour stop as well, but where and when that happens is up to each competitor. Two other eight-hour stops at designated checkpoints are required. Beyond that, racers are free to trudge on, making fatigue basically unavoidable.

The physical and mental demands for mushers are high. Frostbite can set in. Snow blindness, broken bones and illnesses are other hazards. Lack of sleep can bring on hallucinations. They can make a wrong turn and end up lost, desperately trying to rejoin the trail.

In an emergency, other mushers, race officials and Alaskans in villages along the trail and the Iditarod Air Force (made up of more than 30 volunteer airplane pilots), may come to a musher's aid.

The costs of racing dog sleds are not just physical. Being a competitive musher can be very expensive. Paying for dog food and care, gear and transportation adds up quickly, and U.S. $20,000 a year in expenses is not unlikely. Some mushers lease dog teams from others rather than own and take care of the dogs year-round.

For many mushers, the sport is a part-time business or hobby. Others run kennels and focus on sled dog competitions year-round. Most racers find sponsors to help foot the bill.

For more information on mushers and related articles, please see the next page.

As the popularity of the Iditarod Trail Sled Dog Race has grown over the years, competition has grown fiercer, with mushers going all-out to win. Experienced mushers try out new gear, techniques and strategies in hopes of gaining a competitive edge. ­

Musher Jeff King, who’s finished the Iditarod 18 times, including four first-place finishes, tested out an inventive training system for his dogs in the 2007 race. In addition to devising a way for his dogs to swim together for conditioning in warm weather, King took the “rest high, train low” strategy that some human athletes use to boost endurance, and applied it to canines. King had his dogs sleep in an altitude chamber that simulates the oxygen deprivation they would experience at a high altitude. King came in fifth place in the 2007 Iditarod, so there’s no definitive answer as to whether the strategy works.