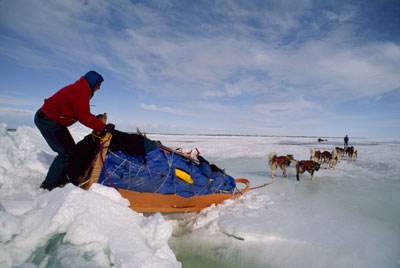 Mushers have to be ready to take on all kinds of frozen terrain, such as the frozen Great Slave Lake in Canada's Northwest Territories.
Gordon Wiltsie/Getty Images

There's a lot to know before heading out on the trail, a lot of expenses and a lot of time and sweat. A musher preparing a team of sled dogs for a distance race carefully plans out a training regimen. Building up endurance takes place over many months, with training runs and competing in shorter races. A team preparing for the Iditarod usually covers 2,000 to 3,000 miles (3,219 to 4,828 km) before the race. Since dogs can only pull a sled over snow and ice, mushers training on dry land use an all-terrain vehicle in place of a sled.

Mushers work to get themselves in good physical condition before a race, too. They may need to run behind the sled at certain points in the race, and the frigid conditions on the trail can take a toll on their bodies, so being physically fit is an advantage. Biking, jogging and other forms of exercise are among the ways mushers stay in shape.

Among other things, a musher getting ready for a race needs to know how to handle and care for the dogs, how to hook up the ropes (lines) and harnesses, how to balance on the sled and how to command the dogs. Wilderness skills -- dealing with wildlife, camping out, judging weather conditions -- are vital. Since many mushers live in Alaska or cold regions, they're fairly used to the snow and cold.

Rookies in the Iditarod Trail Sled Dog Race are required to attend a two-day seminar on dog care, food-drop preparations, training plans and logistics strategies. Still, their inexperience can be troublesome when trying to stave off frostbite, care properly for dogs, and decide when to rest and when to mush.

Each year, some mushers withdraw before the race even begins for various reasons, from injuries to financial difficulties, and several more scratch from the race once it's underway.

As with any sport, there is a lingo among mushers. In addition to knowing a handful of common commands to direct the dogs, mushers use terms like dropped dog (dog who's been removed from the race and left at a checkpoint by the musher), dog in basket (one who's riding in the sled because of injury or fatigue), stove up (a musher or dog who's injured) and trail (to request the right of way on the trail) among themselves.

While some competitive mushers have veterinary backgrounds, most have learned how to care for their dogs without formal training. For those who grew up in a family of mushers, they've been around dogs enough to know how to care for them. Others learn from more experienced mushers, from veterinarians, and from resources such as guidelines by the organizations Mush With PRIDE (Providing Responsible Information on a Dog's Environment) and the International Sled Dog Veterinary Medical Association. Mushers who aren't trained veterinarians rely on professionals for medical care of dogs, but they also know how to resolve some issues themselves, such as applying salve to a dog's hurt feet. Mushers also regularly massage their dogs. Before and during the Iditarod race, veterinarians examine all the dogs and provide care as needed.

The relationship between dogs and mushers is a tight one. The amount of time they spend together at home, in training and during races fosters a bond that leads many mushers to consider their dogs part of the family.

In the next section, we’ll look at what it’s like for mushers during a race.

Since its inception in 1973, the time needed to complete the Iditarod Trail Sled Dog Race has been more than cut in half. The current record for completing the approximately 1,100-mile (1,770 km) race stands at 8 days, 22 hours, 46 minutes and 2 seconds, as posted by Martin Buser in 2002 (versus the 20 days, 49 minutes and 41 seconds it took 1973 winner Dick Wilmarth). The longest it’s taken anyone to complete the race is 32 days, 5 hours, 19 minutes and 1 second, which was musher John Schultz’s time in 1973. The race winner takes home money and other prizes, but the last musher to complete the race doesn’t leave empty-handed. A trophy, called the Wells Fargo Red Lantern Award, goes to that person.