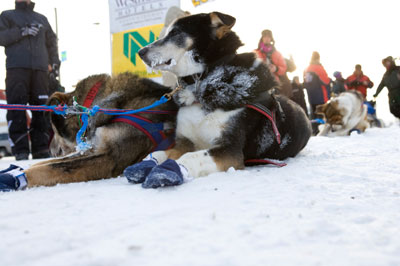 There's no one reason that people decide to get into mushing, but many say that once you try it, you're hooked -- that there's nothing like being surrounded by wilderness with only the sound of the dogs and sled flowing over snow and ice.

Most of today's mushers engage in competitive racing. Dogsledding may have started for utilitarian reasons, but eventually mushers challenged each other to see whose dogs were the best. The competitive sparks first flew in an organized race in Alaska in 1908, when sled dog owners in Nome, Alaska, held the first All-Alaska Sweepstakes, a 408-mile (657-kilometer) race from Nome to Candle and back. The first race in the continental United States, the American Dog Derby, was a 55-mile (89-kilometer) competition in 1917 in Ashton, Idaho. Years later, in 1973, the "Last Great Race on Earth," the 1,000-mile-plus (1,609 km) Iditarod Trail Sled Dog Race, swept through Alaska. Commemorating the 1925 diphtheria serum run from Nenana to Nome, the Iditarod has become the most famous of all sled dog races.

Estimates on the numbers of mushers who now compete in sled dog races are in the tens of thousands (around 40,000 in 2003), with competitors hailing from dozens of countries [source: Sullivan, Jordan].

While the Iditarod's fame overshadows other races, there are many more. For example, there's the 1,000-mile Yukon Quest race, which begins in Fairbanks, Alaska, and ends in Whitehorse, the capitol of Canada's Yukon Territory. There are other notable races in Alaska, though they are much shorter (as noted by the mileage in the race titles), including the Copper Basin 300, the Tustumena 200, the Kobuk 440 and the Kuskokwim 300. In the continental U.S., mushers compete in Montana's Race to the Sky, Minnesota's John Beargrease Sled Dog Marathon and the Laconia World Champion Sled Dog Derby in New Hampshire, among others.

While mushing is a popular pastime in Alaska, it's not the only place with sled dog enthusiasts. In the U.S., people compete in sled dog races in Montana, New Hampshire, Michigan, Minnesota and other states. And in countries around the world, there are dog drivers, with Norway, Sweden, France and Germany topping the list of European countries where sled dog racing is popular [source: Sullivan, Jordan].

Mushers in Alaska's Iditarod race hail from other countries (including France, Canada, Germany and Norway) and from some of the lower 48 states (including Oregon, Colorado, Montana and Minnesota), but a good portion are native Alaskans. They are primarily Caucasian. They cover all age groups but more than a third of the mushers competing in the 2008 Iditarod are under 30 years old [source: Sullivan, Jordan]. There tend to be more men competing than women, but mushing is known as a gender-neutral sport (25 females, out of 110 entrants, have signed up to compete in the 2008 race). In the past, female mushers have won the race, as have mushers from outside Alaska.

What makes a good musher may have less to do with physical abilities than with mental toughness. Winning mushers possess a competitive spirit, a desire to be in the wilderness and a strong connection with the team of dogs, though they also are in good physical shape and have stamina. Unlike in other sports, where physical build is important, people of any weight and size can be dog drivers. Women with lower body weights than men, and therefore less weight for the dogs to pull, have captured Iditarod race wins, but heavier mushers may be stronger and at an advantage for handling dogs. A good musher has strong survival skills and is resourceful, handy and diligent. He or she might need to fix a busted sled brake, fend off an angry moose or wait out a violent storm.

Generally, certification or permits for mushing are not required -- anyone can trot out his or her dogs for an adventure -- but there might be other legal hurdles to clear: For instance, mushers need to obtain overnight permits for stays in Alaska's Denali National Park.

The Iditarod Trail Sled Dog Race traces one long-running ritual to the concern for mushers’ well-being. Called the widow’s lamp, the light shining at the finish line of the race signifies that mushers are still on the trail. When the last musher comes in, the light is extinguished. The tradition is a nod to a common practice of long-ago mushers, who sent word ahead that they were en route; a kerosene lamp was lit to help them find their way.