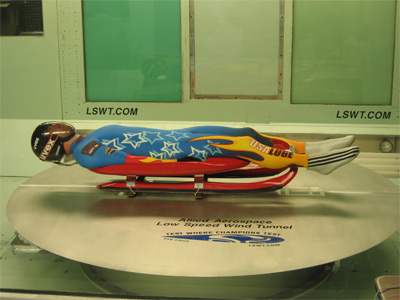 The start is the most important part of the race. It's the time when the slider is most in control, so his or her training can have the greatest affect on the outcome. Luge athletes build tremendous upper body strength for the start, when they'll propel themselves, their sled and any extra weights onto the course. Hand strength is also required for the start, when the slider paddles as quickly as possible for the first several feet of the course. Since a slider's body faces up to 5 Gs during a run, he must be in overall excellent physical and mental condition to manage the 50-second attack on his body and his focus.

In the summer months, luge athletes train hard to build upper body muscles through swimming, weight training and calisthenics. In the winter months, typical luge training includes practice runs every day. Sometimes, they'll practice only starts, developing strength, agility and technique. While the athletes are doing practice runs and starts, coaches are analyzing it all using footage from digital cameras, specialized software and prior reports from athletes about what they're feeling on the course. Luge coaches have a deep understanding of sleds and luge physics, and they use the information they gather to make tiny adjustments to the sleds to maximize speed and control for each slider.

The training technology for the U.S. luge team includes:

Luge training also involves sessions in wind tunnels, during which athletes figure out the form that achieves minimum aerodynamic drag. Monitors above the slider's head and at his feet display a number that represents the amount of drag he's experiencing. During the session, with wind blowing over and against him at 90 mph, the athlete makes minute adjustments to his position to lower the drag number.

In preparation for the 2018 Winter Olympics, Dow Chemical worked with the U.S. team to tweak the sled's bridge to allow the athlete to control it better, as compensation for the very frigid temperatures in PyeonChang, South Korea. Very cold temps make the sled materials more rigid.

Training for luge is about strength and precision, but a slider has to have a certain temperament, too. In luge, adrenaline junkies win.

"The run might only be 50 seconds long, not more than a minute, and you're absolutely knackered after the run because you're focusing mentally and physically," British luger Adam Rosen told the IOC. "You're putting your body through so much and you're doing all this while taking the bumps and steering precisely through all these curves going down. But the more you do it, the more you get used to it, [as] you're constantly navigating the sled."

If flying through icy curves feet-first seems timid, maybe skeleton is your thing. Skeleton is a lot like luge, only the athlete navigates the course head-first and the sled weighs more. Oh, and skeleton suits may have some padding in the elbows. Skeleton racers are actually disqualified for even attempting to slow down during a run.