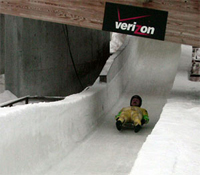 The Olympic luge competition has four divisions: Men's singles, women's singles, gender-neutral doubles and team relay. Since a higher weight is advantageous in luge (see the next section), doubles teams are typically all male. Most international races besides the Olympics have single sliders doing two runs each. Both times are added, and the winner has the lowest combined time. In the Olympics, singles luge competition consists of four runs instead of two (doubles still perform only two runs), all of which count toward the final time. In this way, the Olympics tries to weight consistency as a major factor in a win.

Since every luge track is different from every other luge track, there are no blanket World or Olympic records in luge. There are only track records.

At the start of the luge course, there are two handles, one on each side of the track. The slider grabs these handles and rocks back and forth to build momentum for the start. To begin the race, the slider propels himself onto the course and immediately uses his hands (in the spiked gloves) to paddle through the first 10 feet or so of the track. This helps him gain some speed before lying down on the sled.

Approaching the start of the downhill, the slider lies down on the sled on his back. This is his body position for the remainder of the run. From this position, with his head lifted only enough to have some idea where he's going, the slider navigates the twists, turns and straightaways with his body simultaneously tight and relaxed. This is not an easy state to achieve -- the body must be stiff enough to maximize acceleration (any wobbling or looseness would increase friction between the sled and the track) and yet relaxed enough to absorb the intense forces acting on the slider throughout the run. Since steering increases friction, the slider steers as little as possible, only pressing on the bows when necessary. Most of the time, control is a matter of being one with the sled and letting gravity do its thing.

If a slider crosses the finish line without his sled, the run is thrown out, which means automatic disqualification since all of the run times count toward the final score. However, the slider can cross the finish line carrying his sled, and the run counts.

In 2014, team relay was added to the Olympics. (It became a sport in 2010). Each team has a women's single, a men's single and a double sled. The next slide begins once the previous sled has pressed an overhead touchpad at the bottom of the track. The team with the lowest time after all three sleds have finished is the winner.

Olympic luge is timed to the thousandth of a second -- for comparison, the blink of an eye takes 12 thousandths of a second.

Luge is timed using photoelectric sensors at the start and finish. The setup has a light transmitter/receiver pair at each end of the run. The transmitter is on one side of the track, and the receiver is on the other. At the start, the slider triggers the timer when he crosses the line because he blocks the light beam. At the finish line, he stops the timer the same way.

At the 1998 Nagano Games, the time difference between the women's gold and the women's silver was two-thousandths of a second, the smallest margin in luge history. This miniscule difference between first and second place drew a great deal of controversy, and engineers were called in to calculate the system's margin of error. They found it to be approximately two-thousandths of a second. This triggered a high-tech addition to the timing setup. Since the 1998 Games, luge timing systems have been calibrated before each race using a GPS satellite with an atomic clock that's accurate to the 10-10 seconds (every GPS satellite has an atomic clock built in. The calibration process is basically about synchronizing the timers on the luge course with the atomic clock on the satellite. With a modified GPS receiver built into the timing system, the satellite can trigger the start timer and then trigger the stop timer after a certain interval. If the time noted by the satellite and the time noted by the ground system matches to at least the second thousandth of a second, the timing system is ready for a race.

Completing a luge run is an exhilarating and physically demanding task. Let's take a look at the physics involved in making it from the start to the finish.

You don't need ice to slide. Street luge uses asphalt roads for the track and a wheeled, 8-foot, skateboard-style platform for the sled.