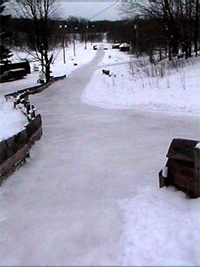 In Olympic luge, the slider (usually not called a "luger") lies down on a fiberglass sled, with no braking system, and heads feet-first down an icy track.

There are actually two types of luge: natural track and artificial track.

Olympic luge is kunstbahn, and it's not for the meek. Two weeks before the start of the 1964 Innsbruck Games, a slider from the British luge team died on the luge track during a practice run. Crashing at 90 mph on an icy track can be very ugly, and luge athletes often face serious injuries if they come off the sled. In 2010, Georgian Nodar Kumaritashvili died while training for the Vancouver Olympics when he lost control of his sled. He flew off the track and into a metal pole. The types of artificial luge tracks used in the Olympics are tremendous structures that embody a lot of technology. There are fewer than two dozen artificial luge tracks in the world.

An Olympic track is artificially refrigerated. The course is usually a reinforced concrete track with evaporators buried in the concrete. The evaporators cool the track to 12 degrees F (-11 C). The track is then sprayed with water to create the approximate 2-inch surface of ice.

A typical luge course is less than 1 mile (1.6 km) long and drops about 300 to 400 feet (90-120 m) or 30 stories in the course of a one-minute run. The configuration includes straightaways, left and right turns, downhills (and sometimes a short uphill) and at least one S-type curve combination like the "labyrinth," which consists of three or four consecutive turns with no straightaways between them.

Just staying on the sled would be a feat for a highly trained athlete. But sliders don't just have to stay on the sled -- they also need to maintain a strictly aerodynamic form, watch where they're going and try to keep the sled in the "sweet spot" that will carry them smoothly between turns, all while facing up to 5 Gs on particularly strenuous courses. According to Canadian slider Jeff Christie in a CBC interview, the consequences of giving in to the G-forces can be pretty painful:

"When you go into a corner pulling five g-forces with your head hanging off the end of the sled, suddenly your head is five times your body weight. You've got to keep it up so you can see where you're going because, trust me, the worst feeling in the world is having your head dragging on the ice at 120 kilometers per hour."

For the level of danger sliders face on each run, the amount of protective gear they wear is shockingly sparse. In the next section, we'll examine the equipment of luge.

Luge is the French word for "sled." Sleds have probably been around since about 800 C.E. in the Viking regions, and the first reference to sled racing came out of Norway in 1480. In 1964, luge became an Olympic sport at the Innsbruck Games.