Hazards of the Iditarod Race 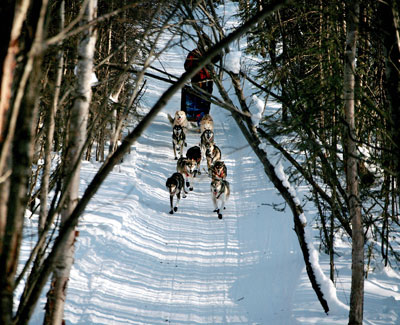 Like any competition, the Iditarod Trail Sled Dog Race has its risks. But in the Alaskan wilderness, where racers are going strong for at least eight days straight, things are especially precarious.

There is no doubt that the weather plays an important role in the race. Temperatures range from 50 above zero to 60 below zero, and falling snow and piercing wind are common. If it's too warm, the trail can be too slushy and wet. If it's too cold, it can be nearly impossible to continue racing.

Moose, wolves, caribou, buffalo and other animals can threaten race teams, with moose being the most troublesome. Snowmobiles also can pose a problem on the trail, as they can damage trails and snow bridges and affect the snow's surface. It's possible for a race team to fall through the ice, as Susan Butcher's did in 1984; her two lead dogs managed to pull the team out.

To ensure the well being of the race dogs, around 37 veterinarians tend to them during the race, and prerace exams are required. Still, overexertion leads to death for some of the race dogs. A host of medical problems can crop up, from foot problems, dehydration and viruses to ulcers, hypothermia and heart problems. A seemingly content team of dogs can engage in a dog fight. When a dog team gets tangled up, dogs can be strangled. Dogs can break free of the harness and become lost; microchips implanted in the dogs and collar tags help identify lost dogs (and also assist in keeping track of dogs that are dropped off at checkpoints during the race).

For the mushers' and dogs' well being, they are required to take checkpoint breaks. A mandatory 24-hour stop must be made, but where and when that happens is up to each competitor. Two other eight-hour stops at designated checkpoints are required. Beyond that, racers are free to trudge on, making fatigue unavoidable.

The physical and mental demands for mushers are high. Frostbite can set in. Snow blindness, broken bones and illnesses can occur. Lack of sleep can bring on hallucinations. Dogs can make a wrong turn and a team might end up off course, with the musher desperately trying to get the pack to rejoin the trail.

Mushers are allowed to assist each other on the trail, but help from outsiders is not permitted. If any outside assistance is accepted for emergencies, it has to be reported to officials and a penalty may be imposed.

The assistance that the hundreds of race volunteers do provide helps avoid and deal with many hazards. Before the race starts, volunteers act as trailbreakers, passing over the path on snow machines and placing markers. More than 30 volunteer airplane pilots, dubbed the Iditarod Air Force, transport dog food and supplies to checkpoints; provide transportation for dogs that are dropped from the race, for officials and for others; and conduct search-and-rescue operations for teams that may have veered off course.

All of these measures are required for a race that takes place over eight days, covers more than 1,000 miles and requires large reserves of mental and physical stamina in the harshest of conditions.

For lots more information on the Iditarod and related articles, please see the next page.­­­

Despite the Iditarod rule stating, "There will be no cruel or inhumane treatment of dogs," animal rights groups have opposed the Iditarod race on grounds that it constitutes animal cruelty. People for the Ethical Treatment of Animals (PETA) has been vocal in its assertion that the race dogs are pushed too hard. The Humane Society of the United States is also opposed to the contest. It's estimated that more than 120 dogs have died during the Iditarod since its inception in 1973. Those critical of the race often call it the "I-hurt-a-dog."